You are here: Home » Articles filed under: 'News' » Article: 'Museums should consider why'

Museums should consider why

June 21st, 2018 | Browse other: News. | Tagged with: decolonizing museums, museums and terrorist attacks, why are museums under attack? | 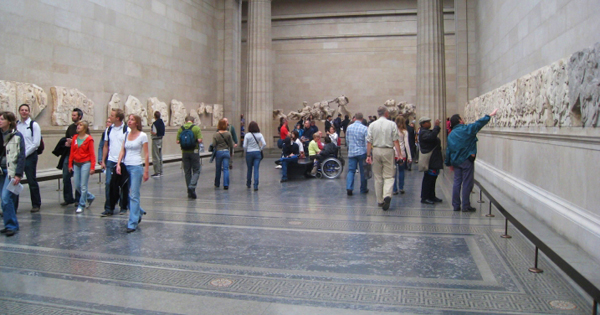 The gallery containing the Parthenon Marbles at the British Museum (photo by Mack Male, via Flickr).

A terror plot targeting the British Museum was recently thwarted, but the reasons why it became a target in the first place go far beyond the current political climate.

In April 2017, a teenaged girl, Safaa Boular, visited the British Museum. As she opened her bag for the security check at the door, as she walked through its galleries, she was thinking about the man she thought to be her husband: an Islamic State recruiter she had married in an online ceremony. Before he died, killed in a drone strike, he had encouraged her to carry out an attack, with guns and a grenade, on the museum.

Boular recruited her mother and older sister, who bought knives. Shortly afterwards, they were all arrested, and this week, Boular was convicted of preparing for a terrorist attack. If she had succeeded, she would have joined the ranks of prior extremists who have targeted museums and cultural sites, including a 2016 Islamic State attack on tourists visiting a Tunisian museum that left 22 dead, the 2015 Islamic State attack in Paris that killed 89 at the Bataclan concert hall, and the 1997 killings of 58 tourists at the Deir el-Bahri archeological site in Egypt.

When we hear about attacks like these, the temptation is to want to step up museum security precautions. Let’s frisk all the visitors and put all the art behind bullet-proof glass! But such solutions interfere with the function of a museum: allowing members of the public to immerse themselves in beauty in a contemplative setting. The function of museum security — of the ritual of entrance bag-checks and the guards’ conspicuous, standardized uniforms — is to remind visitors that they need to do their part to maintain this art-loving atmosphere without oppressive, visible security. Visitors must behave, self-police, and follow the museum’s rules.

One pernicious effect of this soft power-style security is that museum guards often focus their attention on visitors who look like they don’t know what rules to follow. I know this not from firsthand experience — I’m a bespectacled white woman with funky brooches who fits right in — but at secondhand, through my students. I teach art history (with a focus on art crime) at a college with a majority minority student population. When I take a group of young people of color on a museum field trip, I feel like I’m in a Looney Tunes cartoon: my students’ eyes pop, their minds and worlds start widening, and across the room I can hear the guards’ hearts start thumping. My students have never misbehaved during a museum trip, but every time we have earned a personal escort who whisper-shouts “no touching!” as soon as a black hand goes up to point towards an interesting detail of a painting.

Museums are “white spaces,” unwelcoming to people who are often perceived to not know the unstated behavioral expectations that underlie the museum experience. People like my young students of color. Or people like Safaa Boular, who wore a hijab when she visited the British Museum to plan her attack.

The attack Boular imagined bears an uneasy relationship to another fantasy, a scene of a raid on a fictitious “Museum of Great Britain,” a stand-in for the British Museum, in this year’s blockbuster Black Panther. In that scene, a white curator speaks condescendingly to a black visitor and then gags on poisoned coffee as he reminds her that the African objects they are standing in front of were stolen by Western collectors. The visitor and his associates then shoot a few guards and liberate an artifact from his ancestral homeland. He’s a bad guy — he wants the artifact so he can use its power to make war — but it’s hard not to root for him as he speeds away.

It was similarly hard for Mexico to prosecute a man named José Luis Castañeda del Valle who, in 1982, walked out of Paris’s Bibliothèque Nationale with a pre-Columbian Nahuatl codex known as the Aubin Tonalamatl under his coat. Castañeda took the codex back to Mexico, was arrested, and declared that he had stolen it in order to rescue Mexican cultural heritage from Europe. Mexico quickly freed him, claiming that the codex had been illegally exported from its homeland in the 19th century. It has been held by the Instituto Nacional de Antropología e Historia ever since.

Castañeda, the villain in Black Panther, my students — they all have good reasons to ask how museums acquired objects from their cultures and why they are so reluctant to give any of these objects back. To ask why people of color so often appear in museums’ artworks as conquered subjects or generic types, and so rarely as individuals in control of their own lives. To ask why museum labels continue to perpetrate stereotypes.

Terrorism and violent attacks on museums are not the right solution to these issues, but museums should openly consider why they are often targets of anger and violence by groups that are marginalized in society. Museums have spent centuries setting themselves up as symbols of oppressive, colonialist relations with minority groups, particularly since they were often the storehouses of looted and questionably bought items from distant corners of various Western empires. Their intellectual leadership (curators, directors, and educators) remain overwhelmingly white and, in comparison to the rest of society, quite homogenous. It is no surprise that there are growing movements to protest the racism and Eurocentrism ingrained in many museums, and to repatriate objects stolen under colonialism.

Meanwhile, museum visitors who have felt shamed or unwelcome have done the hard and painful work of explaining their experiences in the hopes that museums will change. Some museums have indeed listened and started telling untold stories to new audiences hungry for them. As Sumaya Kassim has pointed out, decolonizing museums “means acceding privilege, and that is almost always painful.” Despite this pain, it’s time for our museums to think hard about what their brass-buttoned guards are really defending them against.