You are here: Home » Articles filed under: 'News' » Article: 'Museums shouldn’t look like'

August 22nd, 2019 | Browse other: News. | Tagged with: museums and galleries now display as little as 5 per cent of their collection, no minimalism for museums | 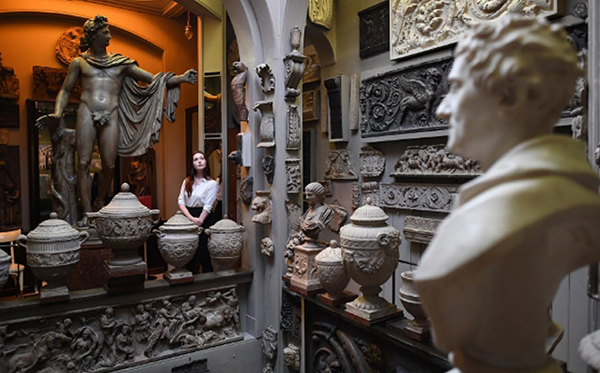 Sir John Soane’s Museum should be an example to others.

Daisy Dunn, Museums shouldn’t look like they were curated by Marie Kondo, The Telegraph, 21 August 2019

Last year, I presented a couple of short films for the BBC from what has to be the most cluttered building in London. Sir John Soane’s Museum is filled from floor to ceiling with antique busts, pots and sculptures. “Watch your sleeve!” the director would cry. “Move the tripod!” begged the museum worker. One false move and we could have toppled a priceless marble.  It’s hard to convey enthusiasm when your arms are pasted to your sides.

Still, as I stood there, staring down the lens in this granny’s attic of a space, I realised that this is what a museum should be. No minimalism. No grand order. No political agenda. Just row upon chaotic row of stuff.

With any luck we’ll be seeing many more museums like this in the near future. For the British Museum is opening a new building to display hundreds of thousands of pieces from its storerooms. The so-called BM ARC, which is to open near Wokingham in 2023, will house much of what is currently packed away in storage.

The Victoria & Albert Museum also has plans to display many of its hidden treasures at a site in the Queen Elizabeth Olympic Park in east London. Both ventures follow the Government’s decision in 2015 to sell Blythe House, a private building holding items that several London museums lack the space to have on show.

It is astounding to think that some museums and galleries now display as little as 5 per cent of their collections. Over the past decade or so, many have helped to overcome this problem by digitising their art, so that what is not on show can at least be viewed online.

This is certainly helpful to scholars and armchair travellers. But for those of us who love the serendipity of a museum visit, nothing can beat the opportunity to browse works which haven’t until now been considered worthy of public attention.

Once the old basements have been emptied and the storage racks swept clean, curators should feel no qualms about piling these treasures high and stacking them deep. The BM ARC boasts 16,000 square metres of space, but that is no excuse for dotting things around as if it were in a Bond Street boutique.

Less most certainly isn’t more. Just look at the Pitt Rivers Museum in Oxford. Founded in the late 19th century, it holds half a million objects from all over the world, many jammed together in curious combinations. It’s all very dark and Victorian. Perfect for getting lost in. One moment you may find yourself next to an Inuit doll. Turn around and you’ll gasp to see the famous shrunken heads. The excitement comes from never knowing what’s around the next corner.

The 18th-century architect and collector, Sir John Soane, revelled in a similar sense of artful chaos in his house-museum. He certainly didn’t suffer from that curiously modern curatorial obsession with “letting objects breathe”. Who cares if you don’t take in every work of art in a single visit? That’s why you go back.

The BM ARC and V&A East Project should mark a new beginning for our museums. Let us see what has been resigned to the back rooms for so long. Only don’t Marie Kondo it into neat and orderly lines. We long to be overwhelmed.