You are here: Home » Articles filed under: 'News' » Article: 'Museums stand with Sioux' 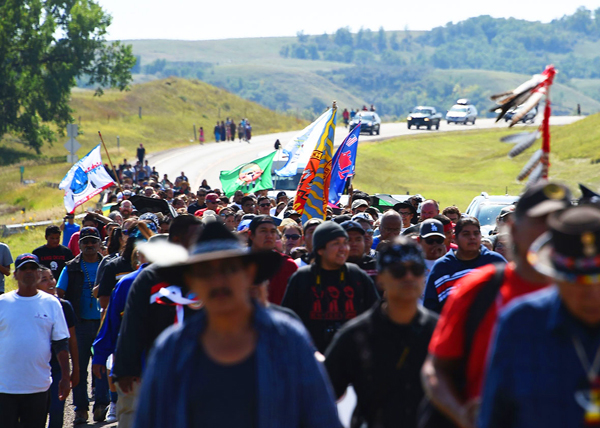 Protesters, including members of the Standing Rock Sioux tribe, march to a construction site for the Dakota Access Pipeline, near Cannon Ball, North Dakota. Source: Slate.com

The heads of the Field Museum, Brooklyn Museum, and Queens Museum speak out.

The Standing Rock Sioux Tribe’s historic battle to stop the Dakota Access pipeline has attracted international attention, galvanizing public discussion about environmental justice and Native American rights. Earlier this month, after the company in charge of the pipeline callously destroyed newly discovered burial grounds and ancient sites that stood in its path, I wrote that the standoff was “a fight about whose culture matters.

Today, some 50 museum directors from across the country—and more than 1,000 archaeologists, anthropologists, historians, and museum workers of all kinds—have signed an open letter with a message of solidarity.

“We stand with the Standing Rock Sioux Tribe and affirm their treaty rights, tribal sovereignty, and the protection of their lands, waters, cultural and sacred sites,” it reads, in part, “and we stand with all those attempting to prevent further irreparable losses.”