Melbourne Museum received top honours at last night’s award ceremony with the Melbourne Airport Award for Major Tourist Attraction, its third consecutive win in this category, placing it in the Hall of Fame.

Melbourne Museum will now compete on a national level when it represents Victoria in the Qantas Australian Tourism Awards to be held in Hobart in February 2013.

Melbourne Museum celebrated a successful 2011-12 financial year, receiving 1,099,000 visitors – exceeding one million visitors for the third year in a row. Of that impressive number, around one quarter were interstate and international tourists, making a significant contribution to Victoria’s economy.

“This award marks a particularly strong year for Melbourne Museum, as we celebrated the end of our most successful touring exhibition – Tutankhamun and the Golden Age of the Pharaohs, welcomed The Wonders of Ancient Mesopotamia exhibition and delivered our new innovative SmartBar event,” said Dr Patrick Greene, CEO, Museum Victoria.

“We are delighted to end the financial year with this prestigious award and enter the Hall of Fame, particularly as we look forward to one of the most productive year’s in the Museum’s history, with the next major travelling exhibition Afghanistan: Hidden Treasures from the National Museum, Kabul and the opening of the new permanent exhibition in Bunjilaka Aboriginal Culture Centre, First Peoples.”

Since opening at the Carlton Gardens precinct on 21 October 2000, Melbourne Museum has welcomed almost 10 million people through its doors.

Tutankhamun broke all attendance records attracting a staggering 796,277 visitors – making it the most popular temporary exhibition ever presented at an Australian museum or art gallery.

The Victorian Tourism Awards recognise and reward organisations that contribute excellence, innovation and commitment to the Victorian tourism industry. 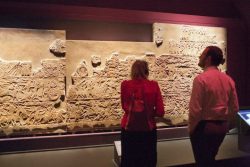 Visitors at 'Wonders of Ancient Mesopotamia' Exhibition in 2012. Photo: Museum Victoria
Positions Vacant » View All
» Director – Museum of Australian Democracy
» Head of Aboriginal Heritage – MAGNT
Latest News » View All
PNGNMAG, AM & Flinders Univ collaborate
to describe extinct PNG kangaroo Read more.
Frogs that lay eggs on land – new WA genus
named for teacher whose lab was a campervan Read more.
ICOM to discuss museum governance in Prague
& need for explicit cultural governance code? Read more.
The Hermitage Dir’s views on Ukraine war &
the museum’s role in exporting culture Read more.
Future proposed for Old QM Building (OMB)
via Qld Govt & QYO $20M donor pledge Read more.
Top +
Council of Australasian Museum Directors c/o Mr Brian Oldman, South Australian Museum PO Box 234 Adelaide, South Australia 5001 Australia, © CAMD 2022
Copyright: All information and resources provided on this website remain the copyright of the Council of Australasian Museum Directors. Permission is granted for viewing and downloading for personal and not for profit purposes. Those wishing to reproduce any materials for commercial, educational or other uses are requested to contact us.
Disclaimer: The content of this website is provided for information purposes only and is not intended as a substitute for professional advice. No claim is made as to the accuracy or authenticity of the content of the website. The Council of Australasian Museum Directors does not accept any liability to any person for the information or advice (or the use of such information or advice) which is provided on this website. The information on our website is provided on the basis that all persons accessing the site undertake responsibility for assessing the relevance and accuracy of its content. No responsibility is taken for any information or services which may appear on any linked web sites. Hostgator.
.