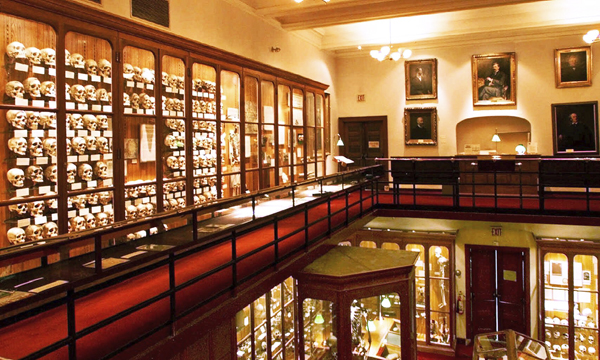 The Mütter Museum in Philadelphia where the skull of Private Thomas Hurdis was displayed. Photograph: Rusty Kennedy/AP.

Paul Daley, US museum to hand over skull of Australian soldier, The Guardian, 4 October 2017

Return of remains of Thomas Hurdis, who died a century ago, comes after outcry over grisly display

An American medical museum has agreed to hand over to Australian authorities for burial the skull of a world war one Anzac servicemen who died of horrendous facial wounds a century ago.

The Mütter Museum of the College of Physicians of Philadelphia confirmed in a statement it would hand over the skull, which has been independently established to be that of Private Thomas Hurdis of the 59th Battalion Australian Imperial Force who died on 3 October 1917.

Controversy over the skull erupted last month after the Guardian reported it was on display at the museum, complete with a grisly description of the wounds that had killed Private Hurdis.

In the statement Mütter said the Australian army first contacted it about the skull in August. This is when the Guardian first approached the museum with questions about the provenance – and human identity – of the skull.

The museum removed the skull from display last week after the military attache at the Australian embassy in Washington contacted the institution stressing the need to repatriate the remains of missing soldiers.

In a letter to the museum, the attache wrote: “The repatriation and interment of Private Hurdis’ skull is consistent with our ongoing efforts to recover, identify and formally inter human remains of our fallen from all conflicts, notwithstanding our affirmative recognition that the accession, stewardship and use of the skull is entirely consistent with the applicable laws and protocols.”

The museum said in its statement that the skull “was given to the museum in 1919 by the British government, supervised by the British Medical Services. The skull was given as part of a collection intended for study by military doctors conducting reconstructive surgery on soldiers”.

However, in an explainer about the skull, since removed from the museum’s website, Mütter had said the skull was donated in 1917 by Philadelphia ophthalmologist WT Shoemaker who treated Hurdis’s wounds at an American military hospital in France.

The explainer read: “This Australian soldier’s skull has extensive damage caused by bullet wounds sustained in the Battle of Passchendaele (or Third Ypres, Battle of Polygon Wood) in the first world war. He was shot on 28 September 1917. Most of the damage was caused by a lead bullet that entered the mouth and passed through the palate and right eye. Shrapnel destroyed the ascending ramus of the right jaw, and another bullet, visible here, struck the left frontal sinus.

“Philadelphia ophthalmologist and surgeon WT Shoemaker treated this soldier at a battlefield hospital in France. This soldier survived his initial injuries and treatments. But, five days after his injuries, blind and disoriented, he pulled out the bandage materials in his mouth that packed the wounds. He bled to death.”

The rest of Hurdis’s remains are buried at Mont Huon military cemetery in Le Tréport, France, where his skull will soon be buried too.

The Mütter director, Robert Hicks, said: “We can appreciate the position of, and are sympathetic to, the mission of the Australian army. The recovery of remains of soldiers who were lost in combat or died as prisoners of war is vital work.

“The Mütter Museum observes a high standard of care and respect regarding human remains, and our observances of relevant laws and protocols is consistent with best practice in United States museums.”

Private Hurdis’s brother John, also an AIF soldier, went missing in the Battle of Fromelles in 1916. It is possible DNA from the skull could be used to identify his body if it is among more than 100 that have been found in mass graves but cannot be personally identified.

The American and British armies have a long-established practice of allowing the collection of human medical samples without permission from the relevant soldiers or their families for medical education purposes providing the individuals from whom they were taken were not identified.

Through a simple triangulation of Australian military records, however, it was possible to easily identify the skull in the Mütter collection as being that of Private Thomas Hurdis, who lived in Sydney’s inner west before he volunteered to fight.