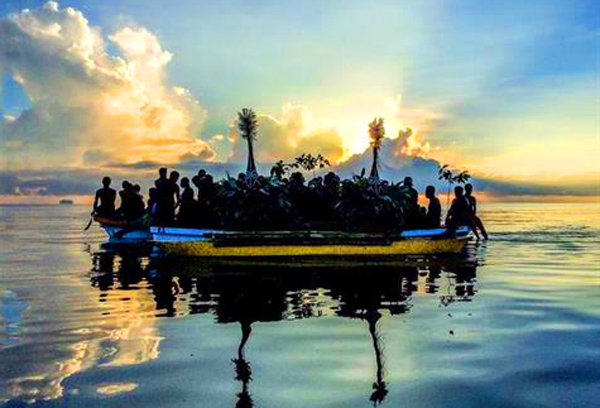 Tolai Men and their sacred tubuan objects performing a ritual Kinawai dance ceremony in the early hours of the morning on a Bit Na Ta (Blanche Bay). Photographed by G. Kakabin.

Commemorating 100 years of Australia’s closest neighbor through its artefacts, video and a collaboration with an ARIA-winning musician.

Although Papua New Guinea is Australia’s nearest neighbour geographically, it has traditionally been held at a cultural distance. Shared projects are rare and relatively few Australians have experienced the cultures of this vibrant nation.

Museums Victoria is challenging that distance through the multimedia installation and exhibition, a Bit na Ta: The Story of the Gunantuna, a collaborative project re-imagining Papua New Guinea through language, colour and symbolic imagery.

a Bit na Ta (‘the source of the sea’) incorporates video footage, photographic works and collection objects, and celebrates the resilience of the Tolai people of Blanche Bay in New Guinea’s East New Britain region, who to date have survived the disruptions of shifting colonial powers, war, volcanic eruptions and independence struggles.

The work is the outcome of a 30-year friendship between internationally renowned Tolai singer George Mamua Telek and ARIA-winning musician and composer David Bridie (Not Drowning Waving, My Friend the Chocolate Cake).

Together they have created an audio-visual dreamscape of moving images projected onto tapa cloth, intertwined by Tolai song, atmospheric sounds and storytelling by cultural historian Gideon Kakabin. Rounding out this deeply symbolic exhibition are contemporary artworks by Lisa Hilli and Museums Victoria collection artefacts.

Exploring the tension between tradition and modernity, a Bit na Ta challenges perceptions through a playful manipulation of image, text and objects.

Melbourne-born Bridie’s long association with Papua New Guinea began in 1990, when his band Not Drowning, Waving recorded the album Tabaran with Papuan musicians, to much critical acclaim.

Now one of the world’s foremost producers of Melanesian music, Bridie went on to co-establish a not-for-profit music label, the Wantok Musik Foundation, which aims to preserve language through music and cultural exchanges between Indigenous Australia and Melanesia.

Premiering earlier this year at the Queensland Art Gallery as part of the No. 1 Neighbour: Art in Papua New Guinea 1966-2016 exhibition, a Bit na Ta draws on the rich oral histories of the Tolai wantok (family) and friends, to capture the history and spirit of a proud cultural heritage.

a Bit na Ta demonstrates the dynamic nature of culture, with the inclusion of Hilli’s contemporary art and of objects from Tolai daily life and living traditions.

Born in Rabaul, Hilli is a descendant of the Makurategete Vunatarai (clan) Tolai / Gunantuna people of Papua New Guinea.  Reflecting on the cultural significance of the Middi (Midi) a regal shell collar worn only by men of high status, Hilli explores historical and contemporary material cultural and photographic representations relevant to Tolai and Indigenous people.