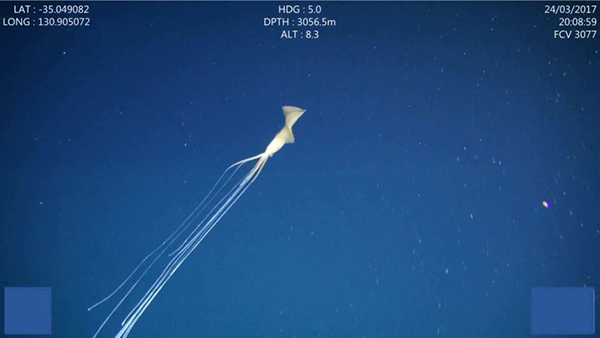 One of five bigfin squid spotted during RV Investigator voyages. Its arms and tentacles are held out at a slight angle, and its long, incredibly sticky strands trail behind. (Supplied: Osterhage Et Al (PLOS One, 2020)).

Australia is home to all manner of weird and wonderful creatures — and scientists have found another peculiar resident.

An elusive squid with long, spaghetti-like strands that lurks in the deep ocean has been spotted in Australian waters for the first time.

Researchers from CSIRO and Museums Victoria filmed five bigfin squid in the Great Australian Bight, some more than 3,000 metres below the ocean’s surface.

Before these sightings, published in journal PLOS One today, the mysterious creatures had only been reported around a dozen times worldwide — and never in Australian waters.

Study lead author Deborah Osterhage, a CSIRO marine ecologist at the time, remembers scrolling through footage recorded by cameras towed behind the RV Investigator in 2015, and seeing her first bigfin squid.

“As I was looking through the images and the videos, all of a sudden I saw this squid, and I immediately knew what it was because I’m a bit of a deep-sea geek,” Ms Osterhage said.

“It had those big fins, those really long, thin strands and that elbow kind of shape.

“As soon as I saw it, I thought, oh my goodness. I know what this is. And I knew it had never been seen in Australia before.”

Then she spotted a second bigfin squid in the footage.

This bigfin squid, swimming more than 3,000m below the surface of the Great Australian Bight, was one of five spotted in Australian waters. Credit: Osterhage et al, PLOS One, 2020

Bigfin squid have, as their name suggests, big fins that flap in a smooth, undulating motion.

But they also sport thin, sticky strands, up to 8 metres long, that dangle from the ends of their relatively short arms and tentacles. The ‘joint’ can look like an elbow.

These spaghetti-like strands are unique to bigfin squid.

To confirm that she had, indeed, caught bigfin squid on film, Ms Osterhage sent footage to a person who scientifically named the bigfin squid family Magnapinnidae back in 1998: Smithsonian National Museum of Natural History zoologist Mike Vecchione.

He confirmed the sightings, which he said were not unexpected: “If you look long enough in any of the deep-water areas, other than maybe the poles, you’ll find bigfins sooner or later.”

But what really surprised him came from footage taken during a 2017 RV Investigator survey using a remote-controlled submarine robot. 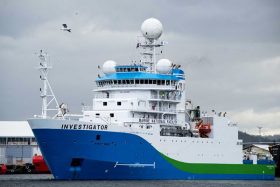 Not only did the trip find three more bigfin squid, but they all seemed to congregate in roughly the same place at the same time — behaviour never before seen in the animals.

Why they might gather in that spot, Dr Vecchione is not sure. It may be that the currents in the area swirl them together in that location.

They may also gather to feed or even breed.

“We don’t know how they reproduce — we have no idea,” he said.

“But we have started finding evidence that some deep-sea swimming animals do come together and form spawning aggregations.

Reeling in the spaghetti-like strands

The very few bigfin squid specimens that we have were washed up on beaches, found in the stomach of a larger animal, or caught.

But biologists have been able to work out from these specimens that those long spaghetti-like strands are covered in microscopic suckers.

This bigfin squid was filmed near the seafloor off Oahu, Hawaii in 2001. It was estimated to be between 4 and 6m long.

“This makes them incredibly sticky. If something bumps into it, it’ll stick to it, like flypaper or a spider’s web,” Dr Vecchione said.

“You can see when they bump into pieces of the submarine, it looks like they have a hard time letting go.”

The new footage also showed how bigfin squid reel in their strands.

“They kind of coil them in really tight coils, which is what brings them up, so when they’re swimming away, they’re not dragging 20 feet of spaghetti behind them,” Dr Vecchione said.

The rarely seen creature was just one of nearly 900 species discovered on RV Investigator voyages that were new to the Great Australian Bight, alongside nearly 300 species new to science, Ms Osterhage said.

“There’s all these fantastical things down there that seem like figments of the imagination, but they’re real and they’re down there in Australian waters.”