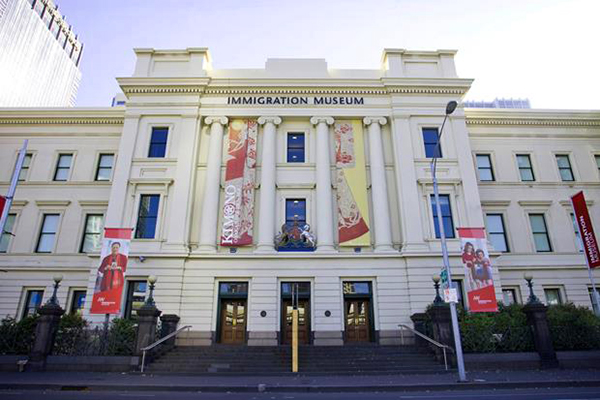 Immigration Museum may no longer be a space for immigrants, Neos Kosmos, 25 July 2019

Immigration ‘re-imagined’ as ‘Museum of Shared Humanity’ through name change

Neos Kosmos requested an interview with Lynley Crosswell, the CEO and Director of Museums Victoria. In response to our request, a spokesperson for Museums Victoria, Anna Quinn said in an email, “Immigration Museum has now been celebrating Victoria’s multicultural communities for more than 20 years. Last year we started looking at how we can reach more people with exhibitions and experiences that celebrate diversity and help connect people from all backgrounds”.

On the Immigration Museum website it writes that the museum’s recent LOVE exhibition showed that the institution is “moving away from stories exclusively about immigration to exploring the idea of human connection” adding that the museum will be “a global counterpoint to intolerance and racism”.

For the millions of immigrants who settled here, it seems the Immigration Museum will no longer hold centre place in a space dedicated to them. Jews, Greeks, Italians, Chinese, Indians, Lebanese, Africans, Maltese, and many others have all faced and many continue to face “intolerance and racism”. The question arises, why that “intolerance and racism” cannot be expressed in the Museum, as many of its exhibits reflect the bigotry faced by all of us?

In 1997, when the Hellenic Archaeological and Immigration Museum was launched it was to chronicle, represent and make evident the impact of migration not merely “celebrate” it. The museum was charged with the responsibility of partnering with multicultural communities yet there has been no partnership with the Greek Community. In the last three years we saw the permanent exhibition of passenger ships that carried our parents, grandparents, or great-grandparents to Australia, disappear from the Museum. Where once history stood now is an empty hall.

The Museum’s website has a statement from General Manager, Rohini Kappadath that “the Immigration Museum is changing” in order to “remain relevant”. It goes on to say that they will need to “engage new audiences, and look to the future”.

Migration is still the main driver of population growth, especially in Victoria. Over a quarter of a million immigrants arrive in Australia annually. Up to 140,000 settle in Victoria from South Asia and China. An additional 20,000 Greek arrivals have settled in Melbourne post-Crisis and many Italians.

The Immigration Museum website says they “did a lot of consultation in the past 18 months with government bodies and members of our community,” however Neos Kosmos has reached out to the Greek, Italian, African and other communities who have no record of consultations.

Neos Kosmos has sought comment from the Minister of Creative Industries Martin Foley, as well as the Minister for Multicultural Affairs Richard Wynne.