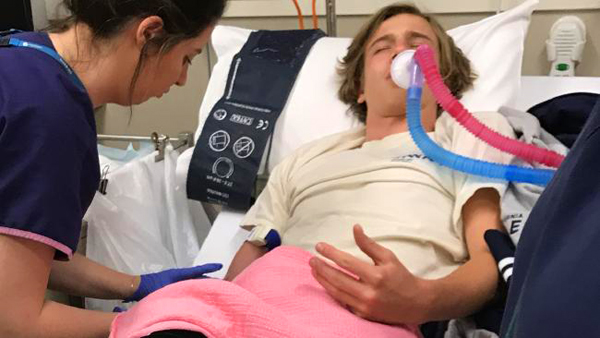 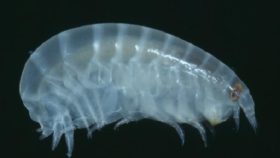 The teenager who was viciously mauled by sea fleas has become wheelchair bound as he remains in hospital recovering from his injuries.

Sam’s father, Jarrod Kanizay, said his son spent another night at Dandenong Hospital but hopes he is released today.

“We’ve been told he will have to be in a wheelchair for a while due to the injuries,” he told the Herald Sun.

“Walking is still causing pain for him so the wheelchair will help to ease the pain and aid in his home recovery once he’s released.”

Mr Kanizay said Sam hasn’t lost his love for the ocean and wants to jump back in as soon as he can.

“We don’t want people to fear the bay because we aren’t and our family will continue swimming and celebrating the ocean,” he said.

“This type of incident doesn’t happen all the time and we’re treated it as a really rare case.”

Scientists on Monday revealed the mysterious sea creatures responsible for the attack.

Marine biologist Dr Genefor Walker-Smith, who examined a sample, said the incident was “unlucky” as the creatures do not usually cause such injuries.

“It’s possible he disturbed a feeding group but they are generally not out there waiting to attack like piranhas,” she said.

Dr Walker-Smith believes the creatures may have possessed anticoagulant-like leeches, which may explain why medical experts struggled to stem the bleeding.

Mr Kanizay, 16, suffered wounds to his lower legs and feet when he went to the beach on Saturday evening to ice down after a footy match.

Mr Kanizay said the injuries were a “freak incident” and has since received a biopsy and a number of stitches as medical experts try to piece together what happened.

Associate professor at Monash University’s School of Biological Sciences Richard Reina said he’s never seen “anything like this on a human before”.

“Sea lice normally go after dead or dying animals — they bite humans too but not as severe as this case,” Assoc Prof Reina said.

“I suspect the reason why the wounds were so intense was because he was standing still for so long and his legs went numb.”

Assoc Prof Reina said it was possible Mr Kanizay was unaware he was being attacked by sea lice because the water was so cold.

“Normally when you feel a sting you will naturally move away from the area or get out of the water but it’s possible he didn’t even know,” he said.

“The general public should not be alarmed because this is a very rare case.”