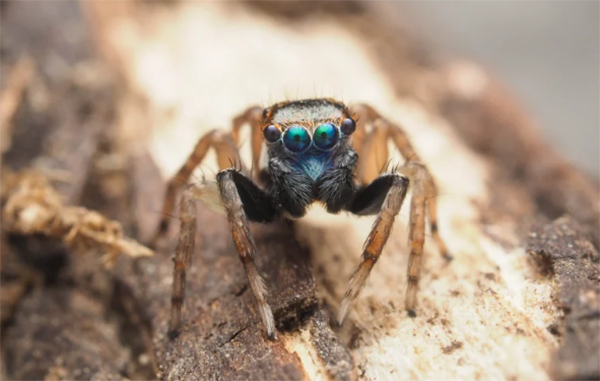 Discovering a new animal species – isn’t that only done by intrepid scientists in far-flung places such as the Amazon rainforest? Apparently not, because a civilian has found a new species of spider on a backyard bin in New South Wales.

Keen citizen scientist Amanda De George said it was the electric-blue face and bright blue eyes that drew her to the four-millimetre-long jumping spider walking across her recycling bin in the coastal town of Thirroul, 80 kilometres south of Sydney.

In June Mrs De George posted a photo and a “what is this?” callout on the Australian Spider Identification Page on Facebook, whose followers include keen amateur arachnophiles and scientists.

Mrs De George was stunned when Joseph Schubert, a Museums Victoria taxonomist (a scientist who classifies new species) and jumping spider expert replied that it was a previously unknown species.

He asked Mrs De George to catch a specimen and send it to him in Melbourne’s eastern suburbs, where he is working from home. 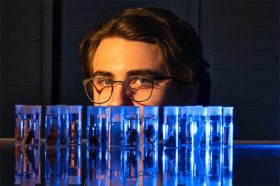 Mrs De George said it took “3½ months of searching constantly, turning over garden furniture and leaves, on my hands and knees” before she saw one again on her back deck and managed to flick it into a snack container.

“I ran into the house screaming, ‘Spider, spider, give me a container!’ ”

Two days later she caught a second one on her car dashboard. Mrs De George stuffed the spiders’ plastic containers with tissue for them to hide in and build webs. She studied postal timetables so their time in transit was as short as possible, and they arrived at Mr Schubert’s house within 24 hours by express post.

According to Australia Post, live insects can be posted, provided packages are labelled and comply with its dangerous and prohibited goods packaging rules, and with the law. 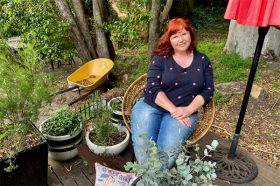 Mr Schubert said he was “very excited” by the find.

The spider species Mrs De George discovered, part of the genus (group of species) Jotus, will be given a full Latin name after Mr Schubert has published a paper on it.

It could be named after Mrs De George. Last year another Jotus species, Jotus karllagerfeldi, was named after fashion designer Karl Lagerfeld because its markings resembled his classic suit and sunglasses.

About 4000 spider species have scientific names in Australia, but it’s estimated about 10,000 species exist. Mr Schubert has named 17 species in 18 months, venturing as far as Kalbarri in Western Australia to catch specimens.

“But as you can tell from Amanda, you could very easily find a new species in just your backyard, which is pretty cool,” he said.

Jo Harding, manager of nature discovery program Bush Blitz, said anyone could submit images, sound and observations of animals or plants to online projects such as iNaturalist, with the information added to national databases and contributing to research.

Mrs De George – a former zoo-keeper who runs her own Facebook page, Backyard Zoology, where she posts her photos of local wildlife – said she had been afraid of spiders after a large huntsman landed on her head in the shower 20 years ago.

But three years ago a new camera lens enabled her to take photos of insects. She discovered the diverse spiders in her garden and realised “how adorable they are”.

Asked how it felt to find a new species, she said: “This is it. This is like the pinnacle for me. It’s all downhill from here. It’s really cool to think that I’ve been able to contribute something to science.”