You are here: Home » Articles filed under: 'News' » Article: 'MV judges The art of science at Fed Sq'

MV judges The art of science at Fed Sq 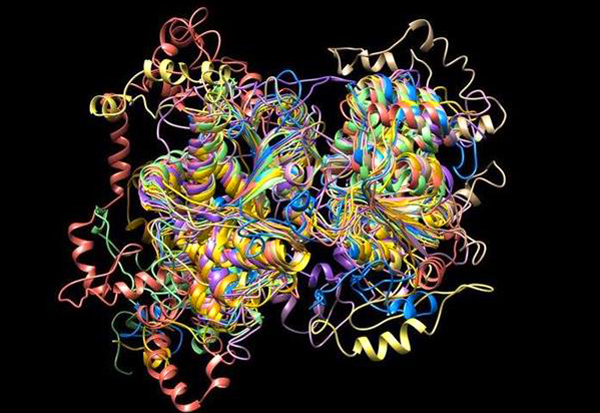 It’s called Art of Science because the subject of this exhibition is the art created by scientists through their drive to discover the unknown, even things that are not visible to the naked eye. These 20 images are the result of cutting-edge imaging technologies, computer simulations and data collected at the Australian Synchrotron that render research of the sub-microscopic into visuals that are simultaneously strange and familiar.

The art of these images is the ability of the researchers to see the aesthetic in the scientific. It takes an artistic eye to see a landscape in the actions of blood and lymph vessels as Alison Farley does in Bird’s eye view, a channel country of green and blue and black and white and grey, or Zoe Grant’s Creature of the deep, using a live-imaging technique to capture blood vessels being formed from bone, resembling an electric marine organism.

Some of the images look as though they could have been painted. Caleb Dawson’s Breast cancer exploration has a Leunig quality about it, and Bianca Capaldo’s Blossom can be imagined as a form of botanic art, but is actually breast tissue as seen through a high-powered microscope. Louise Baker’s Parasite playground is a pale mauve moon with light yellow squiggles and scribbles of parasitic worms. Onisha Patel’s A pragma of Forest is the continuous line of a spiral, highlighting a naturally occurring arrangement in many proteins, but shown with a fine line reminiscent of the work of the French illustrator and designer Frédéric Forest.

Other images may look like abstract art, but unlike some artworks where meaning can be uncertain, all of these images have specific intent. They are there to be studied in attempts to find cures for various health conditions. The kaleidoscopic lattice of Tracy Putoczki’s Winter wonderland is key to blocking a signalling protein that can drive a cancerous growth. Clare Weedon’s Cnidaria is a neon composition of purple and blue that pictures healthy lung structures as a way to investigate lung cancers, one of the leading causes of cancer deaths in Australia.

Although they are captured at a microscopic level, a number of the images are quite cosmic in effect. Carolyn de Graaf and Christine Biben’s The big bang is a still from a video that is an explosion of coloured beads on a black background. Caleb Dawson’s Splatter painted lung is a galaxy of pink and blue and yellow. Francine Ke’s Starry starry night is a purple and pink cluster of stars in deep space that are actually embryonic cells.

If you think of Leonardo’s anatomical drawings, it shouldn’t be so novel to look upon artists as scientists or scientists as artists. The researchers at Australia’s oldest medical research facility, the Walter and Eliza Hall Institute, have former director Professor Suzanne Cory to thank for this dual sensibility by founding the annual Art of Science competition in 1997. This year the winner was selected by a judging panel from Museums Victoria, including CEO Lynley Marshall, Senior Curator for Human Biology and Medicine Johanna Simkin, and Collections Curator for Engineering Matilda Vaughan.

The winning entry was Gobstopper, by Brendan Ansell, Balu Balan and Aaron Jex. It could have as easily been called Party popper, a multi-coloured tangle of twisting tendrils. The 3D image is of the proteins that Giardia, the most common form of parasite in humans, uses to transform into a cyst. Their work is to find a way to block this transformation and this image is a way to visualise the structure of those multiple proteins.

Art of Science 2018 is held in concurrence with National Science Week. In Latin, the motto for the Walter and Eliza Hall Institute is fiat lux, ‘let there be light’. Indeed, this exhibition shines many lights into the dark places inside our bodies and finds within us the sublime and spectacular.

The exhibition was curated by an internal panel from the Walter and Eliza Hall Institute: Head of the Centre for Dynamic Imaging, Kelly Rogers; WEHI.TV biomedical animations manager, Dr Drew Berry; and fundraising manager Susanne Williamson.