You are here: Home » Articles filed under: 'News' » Article: 'MV listens to & learns from kids'

MV listens to & learns from kids 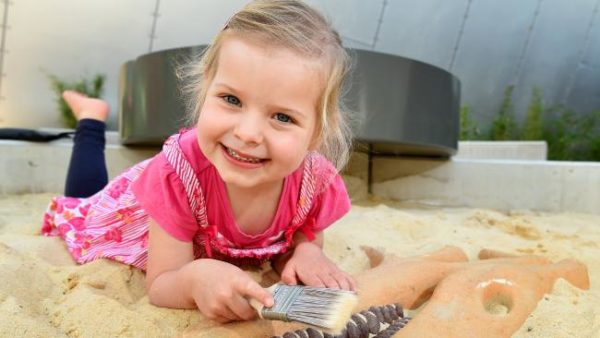 Museum Victoria consulted more than 600 experts to create its new Children’s Gallery and 500 of them were kids. Now the children’s insights are being used in adult spaces.
Any brave parent who has taken their child to a museum knows that too often kids just want to press all the buttons and play on the escalator. Children’s museums are learning they need to make the museum experience as much fun as the lift panel.

The result can be seen in designed spaces such as Melbourne Museum’s new Pauline Gandel Children’s Gallery where the museum space has been transformed with climbing nets, gigantic pull​eys, a lullaby cocoon, and a sprawling garden complete with dinosaur fossils waiting in the sandpit.

But it’s not just about making museums fun. Museums are embracing, play-led learning, a concept based in rigorous scientific research into early childhood development, which shows that children learn best when they are playing. Playing helps a child’s brain develop the flexibility that will improve potential for learning later in life, as well as helping the child to make meaning of the world.

The display cases were shrunk to child height, and filled with things of interest to children but the explanations were still dry text. ‘The one thing they did to concede for children was to leave the Latin names off the descriptions,’ said Linda Sproul, Manager of Education and Community Programs at Museum Victoria.

‘So if we fast forward to 2017, the achievement of the new Children’s Gallery is that it is purely based on the idea of how to stipulate and foster play. It’s based in modern understandings of early childhood development, and the importance of neural development and synapse connection. We’ve created a kind of brain garden.’

Many innovative museums around the country are realising the importance of play-based learning for children. The Museum of Australian Democracy at Old Parliament House in Canberra has a dedicated space called PLAY UP, where children are encouraged to ‘stand up, dress up, make up, think up and step up’.

‘PLAY UP was deliberately developed as a hands-on, experiential and play-based exhibition space,’ said Nanette Louchart-Fletcher, creative producer for young people and families at the MOAD. ‘We consider our youngest visitors to be important cultural citizens and treat them with the same respect and courtesy that we afford our adult visitors. We have developed a philosophy that informs all the work that we do with children and young people emphasising their agency, creativity and ability to make the world a better place.’

‘Regardless of our age, we learn best by doing,’ said Louchart-Fletcher. ‘With the development of PLAY UP we sought to connect play-based learning with the museum’s content. I worked with Dr Barbara Piscitelli, one of Australia’s leading specialists in family learning in cultural settings, to explore how to ensure that content was not lost in a play-based learning setting.

Breaking down large concepts like democracy, freedom and agency so that children can understand them is a challenge for MoAD. ‘With Barbara, I recognised that one of the best ways to start the conversation with children about democracy is to start with the idea of rights and responsibilities. My hallelujah moment was looking at the Convention on the Rights of the Child (CRC) and realising that it was a perfect fit for MoAD as a tool to help us have conversations with children and families.’

‘The CRC is the umbrella framework that scaffolds everything we do in PLAY UP,’ said Louchart-Fletcher. ‘Since opening in 2014 we have exhibited the Right to Play (article 31) and the Right to Shelter (article 24). Within the next few weeks I will begin work developing the new version of the exhibition which will again speak to the CRC through play-based learning.’

Finding a way to present a museum’s content through play-based learning is a challenge, but working with early childhood experts and with children directly plays an important part in ensuring that the children themselves will enjoy the space. The Melbourne Museum spoke to about 500 children and 100 adults, plus inclusion specialists and medical professionals. The lengthy consultation and collaboration process was an important part in the success of the Gallery. ‘Sometimes when people consult, they might just do it once,’ said Sproul. ‘The real beauty of this project is that at three or four development stages, we went back to the people we’ve been talking to.’

They listened to those two young to talk too. While earlier Children’s Galleries were targeted at 3 to 8 year olds, this one recognised play-based learning starts at birth.

The insights and feedback from the children and parents helped shape the practical elements of the Gallery, as well as some interesting insight into just how scary children would like their museum to be.

‘They said, “We want it to be scary, but good scary”’, said Sproul. ‘That’s where the tigers come from.’ The tigers Sproul is referring to are taxidermy tigers hiding in the wall of the Camouflage Disco, so a dancing toddler might suddenly come face to face with a tiger. But Sproul said that it’s a fine line between good scary and just plain scary: ‘One thing we tested was a projection of a spider, going across the floor, which caused absolute pandemonium and mayhem.’

While the new Gallery has been influenced by various artists and artworks – notably Darren Sylvester’s light up dancefloor at Melbourne Now in 2013 and Japanese artist Yayoi Kusama’s iconic polka dots – the Museum’s in-house design studio is responsible for the multi-layered space.  ‘We are very proud of the fact that we have our own 3D and 2D designers,’ said Sproul. ‘We create interdisciplinary teams… so we have a huge wealth of talent within the creative industries skills.’ Local street artist GhostPatrol and sculptor Martin Moore also contributed works to the garden area.

Adults need to play too

The insights that Museum Victoria gained from the research involved in creating the Children’s Gallery has broader applications within the organisation. ‘We don’t underestimate the power of having conversations with people. This is a difference between what the museum does now, and what it might have done in the past, which is, we want to learn together with our audiences to work out what works for you.’

Up next, the Museum is looking at developing the Human Biology area of the Mind and Body Gallery, and will use a similar collaborative model when developing the project. ‘While it is going to focus on adults, the team there is wanting to make sure that they do a lot of open collaboration so we are trying to take some of the practices that we learnt in the Children’s Gallery,’ said Sproul. ‘We’ve always been audience focused, but the testing and trialling and going back and asking them again, is really important. ‘The things we’ve learnt about building more immersive and self-directed experience will be included into that.’

Sproul enjoys watching the individual reactions of children in the new space and she can see the value for adults as well as children.

Play-based learning areas and dedicated children’s spaces can reflect the broader values of the museum. ‘As an organisation we feel strongly that a museum of democracy should encourage the active citizenship and participation of visitors of all ages,’ said Louchart-Fletcher. ‘Democracy is most successful when the broadest range of citizens engage with it. Over the last four years we have been developing a suite of participatory engagement experiences through events and exhibitions such as Free Speech Floats, the Zine Lounge and For the Record that are for all ages yet have some of the successful hallmarks of PLAY UP including out-of-the-box exhibition design and inspiring collaborative engagement possibilities that build a sense of community and offer visitors the possibility of transformational thinking.

‘We like to think that we are pushing the boundaries of engagement in museum settings and continue to refine our practice to offer all our visitors the best possible experience they can have.’