MV Merino’s grounding in 1952 with TMAG

In 1952, a major painting by Pierre Soulages almost disappeared off the coast of Tasmania. Now it has resurfaced — to be offered in the ONE  sale in Paris on 10 July

In the early hours of Christmas Day 1952, the cargo ship MV Merino ran aground off the east coast of Tasmania in dense fog. Bound for Hobart, it had 18 men on board, as well as a particularly precious cargo: 119 paintings sent to Australia from the other side of the world.

A landmark exhibition, French Painting Today was to showcase work by an array of artists based in France, from the long-standing (Matisse, Picasso, Chagall) to the newly established (Hans Hartung, Zao Wou-ki, Pierre Soulages).

Four years in the planning, the show had been jointly organised by the Australian and French governments, with Hobart set to be the first stop on a multi-city tour that would also take in Sydney, Brisbane, Melbourne, Adelaide and Perth.

For a few days at the end of 1952, however, it was unclear whether the MV Merino — or any of the masterpieces on it — would survive intact. The 550-ton vessel remained stranded on a sandbank. It was only refloated when tugboats arrived from Hobart, shortly before the New Year.

French Painting Today would go ahead, albeit slightly belatedly, at the Tasmanian Museum and Art Gallery and the other five venues. Thanks to the media coverage surrounding the MV Merino — and the fact that this was the first major showing of modern French art in Australia — it proved a huge success. 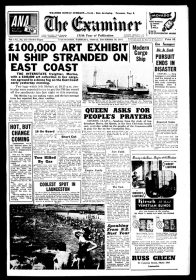 According to Adelaide tabloid The News, ‘these French paintings are creating the greatest furore for years’. The Canberra Times, meanwhile, spoke of a ‘provocative event’, warning readers that a ‘masculine Antipodean palate, accustomed to a diet of realism, may find some of the paintings sophisticated to a point of being effete’.

Numerous attendance records were broken, with a combined total of 200,000 people seeing the show in Sydney and Melbourne alone.

Among the star exhibits was Soulages’s Peinture 130 x 89 cm, 25 novembre 1950. As ever with this abstract artist, who turned 100 last year, black was the predominant colour.

Black, architectonic bars are layered on top of each other against a pale ground. They come in the form of either vertical or diagonal brushstrokes, which provide a contrapuntal structure. 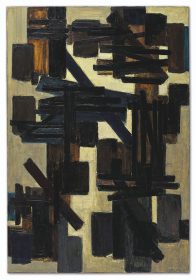 Soulages’s imagery is frequently likened to that of the Abstract Expressionists in the US, who emerged, as he did, shortly after the Second World War. In contrast to their largely gestural approach, though, the Frenchman cared greatly about the construction of his compositions, in a bid for formal balance.

Among the influences on his artistic vocabulary, Soulages often cites the Romanesque architecture of the abbey church of Sainte-Foy in Conques, a village near his hometown of Rodez in southern France.

He says that standing beneath its huge barrel vault as a youth was his ‘first artistic experience’ — and that it inspired him to become a painter. With its play of vaulted shadow and tranquil light, Peinture 130 x 89 cm, 25 novembre 1950  is surely an homage to the abbey.

Brushstrokes range from broad slabs to narrow masts, with Soulages’s tarry black offset by occasional passages of mahogany and Prussian-blue. A sepia background glows softly from the centre, like daylight breaking through a window — which seems apt, given that Soulages was commissioned to design new stained-glass windows for Sainte-Foy in 1986.

Soulages, incidentally, tends to dislike giving his works conventional names, lest this unduly influence a viewer’s experience of them. He prefers titles that simply state a picture’s dimensions and date of execution.

Peinture 130 x 89 cm, 25 novembre 1950  was thus painted in 1950. Even at this relatively early stage of his career, Soulages revealed one of his longest-lasting preoccupations: the dynamic interaction of light on black paint.