November 18th, 2022 | Browse other: News. | Tagged with: How metal-munching microbes help the rare toxic element tellurium circulate in the environment | 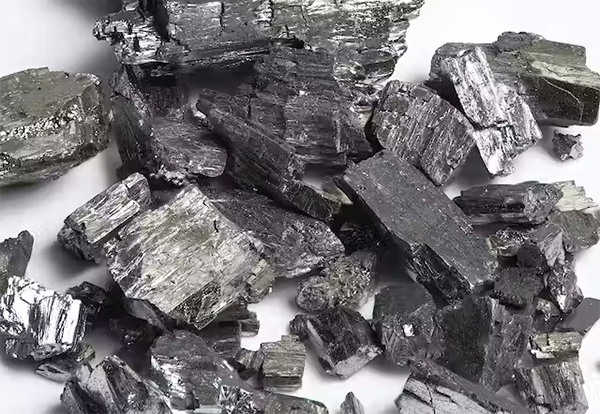 How metal-munching microbes help the rare, toxic element tellurium circulate in the environment, The Conversation, 16 November 2022

New technologies often mean elements start moving through the environment in new ways. Take lead plumbing: it helped provide access to fresh water for the masses, but left a toxic legacy that remains to this day.

As we transition away from fossil fuels, we are turning to technologies reliant on rare elements that had few uses in the past. One of these is tellurium, an element found in an increasing number of solar panels.

How do we anticipate the potential pitfalls of a dramatic increase in the flux of tellurium through the biosphere? And how do we secure safe and reliable supplies of this commodity?

To start answering these questions, we travelled to an abandoned gold mine in Mexico – and discovered how metal-munching microbes are moving this elusive element through the environment.

Elements on the move

Tellurium is as rare as gold in Earth’s crust, with only around 1 milligram in each metric tonne of average crustal rock. The silvery substance was discovered only in 1783, and until recently its main claim to fame was the fact it can make you smell unpleasantly like garlic if you handle it.

Tellurium is often found in gold deposits. Despite gold’s famous reputation for durability, over the past 15 years we have discovered the precious metal is remarkably mobile in the environment – even growing in trees!

It turns out certain microbes can effectively munch on gold, slowly transforming gold nuggets into chemical forms that can move through the environment. These mobile gold compounds (particularly ones that can dissolve in water) are quite toxic: only a few metal-resistant microbes can thrive in the unique micro-environment found on the surface of a grain of gold.

Microbes and organic material on the surface of native gold (left) and tellurium (right) contribute to active cycling of these rare elements. Newly formed tellurium nanoparticles are highlighted in the yellow circles. Missen et al.

We wanted to test whether microbes can cycle tellurium through the environment in the same way they do for gold. We used natural ore deposits to do this, but this gives us information about what would happen if tellurium-rich materials were dumped by humans.

Finding a suitable site was a challenge. Since high tellurium content is associated with high gold content, most tellurium deposits close to the surface (such as those near Kalgoorlie, Western Australia) have been mined out a long time ago.

Eventually our quest led us to Moctezuma in Mexico, where there is a small former gold mine that is exceptionally rich in tellurium.

Metallic tellurium in the fresh ore (left) oxidises to colourful minerals near the surface (green emmonsite in the middle panel). Further away from the vein, tellurium can still be detected (right), but does not form its own minerals. Missen et al.

At the mine, we studied ores and soils away from the main vein of gold and tellurium. We found tellurium was moving away from the richest ore, and discovered the first evidence of natural tellurium nanoparticles on the surface of pieces of native tellurium.

This discovery is significant because nanoparticles play a special role in the environment, as they have different properties compared to macro-particles. For example, they tend to be more reactive than larger particles, and they may be toxic in their own right.

The tellurium nanoparticles we found appeared very similar to gold nanoparticles that have previously been found on the surface of gold grains.

In in-vitro experiments, some microbes present in gold- or tellurium-rich environments are able to excrete nanoparticles of the metals dissolved in the growth medium, thereby detoxifying their environment. On the left, a Serratia cell shows many gold particles on the cell surface (lighter blobs); on the right, a cross-section through a Rhodococcus cell shows needle-like particles of tellurium growing in (arrow) and around the cell. Missen et al. / Presentato et al.

We also showed that gold and tellurium have rather different modes of transport in soils and groundwater.

Gold particles can be carried a long way in rivers, for example. However, tellurium metal oxidises quickly when exposed to air, forming highly soluble – and toxic – compounds. Hence, there is no physical transport of grains of tellurium in metallic form.

The movement of tellurium is also limited by reaction with common minerals in soils. This is a good thing, since tellurium’s limited mobility keeps concentrations in groundwater low, and hence limits toxic effects.

In our latest research, we have detected tellurium nanoparticles in the soil of Moctezuma, away from the metal-rich outcrops.

Because metallic tellurium nanoparticles are highly reactive and not expected to survive for long in soils, this discovery provides the strongest evidence yet that microbes are actively helping to cycle this rare element through the environment. Tellurium in these soils in most likely subject to a dynamic cycle of oxidation and dissolution followed by reduction and precipitation, all controlled by microbial activity. 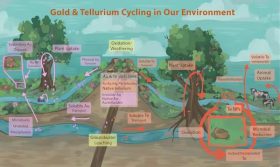 A schematic summary of gold (on the left) and tellurium (right) cycling. Ella Lausberg.

We are only now beginning to understand how microbes cycle “exotic” elements such as tellurium. Understanding these “biogeochemical” processes is important to understand how elements move in our landscapes. We can then assess potential risks, and design efficient mitigation strategies. This understanding can also aid in developing more sustainable mining (and recycling) technologies. Around Moctezuma, at least, microbes effectively separate gold from tellurium in soils.

Innovative solutions will be required to address our planet’s need to generate more energy more sustainably, and cleaning up mine product processing to better separate all potential commodity elements is just one of these ways.