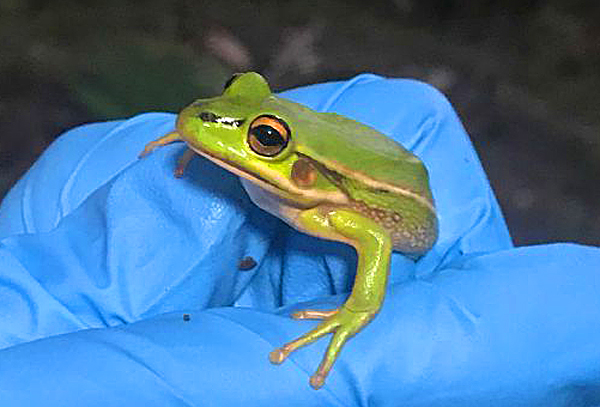 Imagine it’s pitch black and you’re standing in the middle of a wetland, among dense reeds on a Monday night looking for tiny, slimy frogs.

The needle-in-a-haystack search is the unglamorous work of Museums Victoria researchers on a three-year mission to ensure the survival of the tiny amphibians in the state’s east.

It’s been years since some frog species were last documented in Gippsland and Jane Melville is worried they’re at risk of dying out without the intervention of researchers.

“There are huge gaps in what we understand,” she said.

Museum Victoria has now begun a three-year study aimed at tracking down the frogs and collecting tissue samples for genetic research.

The samples — such as a clip of a frog’s toe webbing — will be stored in a state-of-the-art storage tank at the Melbourne Museum in Carlton.

Dr Melville’s field work has so far focused on threatened species, including the striking green and golden bell frog.

“This species is now federally listed as vulnerable,” she said.

“It has been impacted by a disease called chytrid which is a fungus that has affected frogs all over the world.”

She said little was known about the genetic health of the species in Gippsland and greater knowledge may identify ways to help support the population.