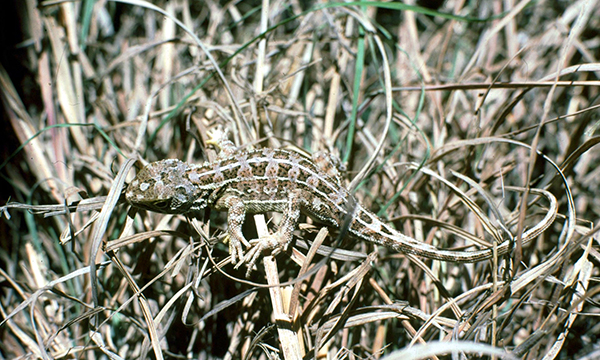 The grassland earless dragon (Tympanocryptis pinguicolla) has been reclassifed as four species, one of which is feared extinct. Photograph: Will Osborne.

Hunt is on in Melbourne for grassland earless dragon – not seen since 1969 – after one species was reclassified as four.

A newly reclassified species of lizard that is native to areas now paved by Melbourne’s suburbs could become the first reptile on mainland Australia to be declared extinct.

A taxonomic survey of the grassland earless dragon, published in the Royal Society Open Science journal this week, discovered that the species classified as Tympanocryptis pinguicolla was in fact four species – one of which has not been seen since 1969.

The missing lizard made its home in the grasslands of what is now St Kilda and Kew, and on the islands in the Yarra River. It was last spotted 50 years ago in grasslands between Melbourne and Geelong, most of which have since been overtaken by development.

Zoos Victoria is undertaking survey work in an attempt to find the lizard.

If it cannot be found, it would be the first reptile declared extinct on mainland Australia.

Island whiptail-skink or forest skink (Emoia nativitatis), which is listed as critically endangered under the Australian Environment Protection and Biodiversity Conservation (EPBC) Act, is listed as extinct on the IUCN Red List.

The Christmas Island blue-tailed shinning skink (Cryptoblepharus egeriae)and Christmas Island gecko (Lepidodactylus listeri) are both listed as critically endangered under the EPBC Act and extinct in the wild by the IUCN.

The lead author on the dragon paper, the Museums Victoria curator of herpetology, Dr Jane Melville, said she was hopeful that surveys in unexplored grassland habitats around Melbourne would unearth signs of Tympanocryptis pinguicolla.

“There’s no question that this is of significant concern and may well turn out to be extinct, but at the moment Zoos Victoria are still hopeful that they’re going to come up with a population,” Melville told Guardian Australia.

The Zoos Victoria threatened species project officer, Adam Lee, said the species was listed on the zoo’s fighting extinction program, which is a commitment to not allow any terrestrial Victorian vertebrates to go extinct on the zoo’s watch.

“It was historically found around western Melbourne and through the temperate grasslands of the western Victoria volcanic plains,” Lee said. “Much of this has been swallowed up by agriculture, however there is still much unsurveyed land.

“We are committed to continuing to look for this small, elusive and cryptic lizard.”

The other related species make their homes further north: Tympanocryptis lineata in Canberra, with a captive breeding population at Canberra University; the newly named Tympanocryptis osbornei in the highlands near Cooma; and Tympanocryptis mccartneyi near Bathurst.

The latter was named for retired national parks officer and reptile enthusiast Ian McCartney, who helped Melville’s team classify the Bathurst lizard. It has not been seen since the 1990s and is also now on an extinction watchlist. 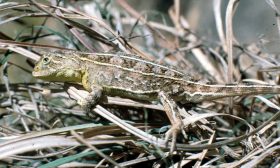 A Tympanocryptis lineata in Canberra. Photograph: Will Osborne.

Currently, all four species are listed as Tympanocryptis pinguicolla in the EPBC Act.

“They are currently listed under the EPBC as endangered but it’s hard to target a conservation management plan if you know there’s taxonomic problems and you have actually got separate species,” Melville said.

Melville had earlier identified a fifth species, Tympanocryptis condaminensis, which is found on the Darling Downs in Queensland. It was recognised as distinct by the Australian environment minister in 2016.

The grassland earless dragons are unique because they are part of the only group of dragon lizard species in Australia to live in temperate grasslands.

Dragon lizards include frill-necked lizards and thorny devils. They are distinct from other lizards by being spiky, rather than smooth and shiny, and from the unique formation of their teeth.