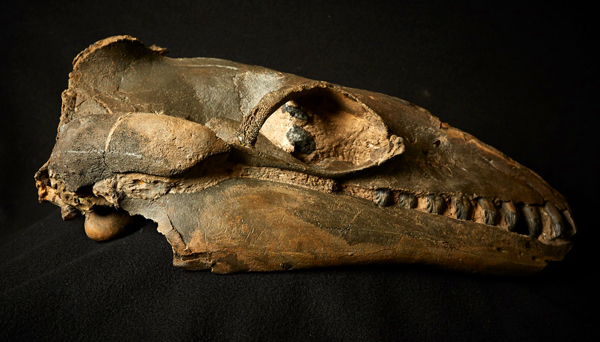 Finding debunks long-held idea that teeth of prehistoric animals were shaped to allow water to sieve through them.

Australian researchers have produced new evidence disputing a popular theory of whale evolution proffered by scientists from Charles Darwin onwards about the development of baleen, the hair-like strands used to filter krill out of the water and down the gullet of the largest mammals on the planet.

Using 3D modelling of a prehistoric tooth dug out of the rocks near Torquay on Victoria’s southern coastline in 2016 and comparing it to similar modelling of modern predators, a team of scientists based at Museums Victoria found that rather than being shaped as a precursor to filter-feeding, the teeth of ancestral whales were surprisingly sharp.

“Their teeth really optimised in shape for slicing through flesh,” senior curator of vertebrate paleontology Dr Erich Fitzgerald told Guardian Australia. “The whale teeth are really much more like the slicing blades of big cat and wild dog teeth.”

The tooth belonged to a Janjucetus, a species of whale that co-existed with the forerunners of modern baleen whales off the Victorian coastline about 25 million years ago. It is part of the ancestral pool of species that led to modern baleen whales, like blue whales, humpbacks and right whales.

“The teeth of Janjucetus were virtually as sharp as those of the living African lion, which we were absolutely surprised to find,” Fitzgerald said.

The finding debunks a long-held theory that the teeth of prehistoric whales were shaped to allow water to sieve through them, like the teeth of modern leopard and crabeater seals, and that the filter function drove a linear evolution between teeth and baleen.

It is a theory explored by Darwin, who posited in On the Origin of Species that the baleen of the bowhead whale, which he called the Greenland whale, could have evolved “by finely graduated steps, each of service to its possessor” from a mouth that resembled the ridged beak of a duck.

It was a hypothetical suggestion to illustrate his theory of evolution but the “neat linear story” of how whales developed baleen persisted, Fitzgerald said.

The new research published in Biology Letters on Wednesday supports an alternate theory that whales were ruthless predators that lost their teeth before evolving baleen.

“They start off as killers, they then become suckers and eventually become sievers,” Fitzgerald said. “They never used their teeth as a stepping stone between biting fish and then sieving out krill.”

The “suckers” phase is not as odd as it sounds: many sea creatures, including dolphins and sperm whales, effectively use suction to catch their prey, opening their mouths to create a vacuum that sucks in smaller creatures.

“We think it is as simple as whales being predators and then starting to suck in their prey and as time went on, the hundreds and thousands and millions of years, the teeth reduced in size,” he said. “During that process some of the gum tissues in the roof of the mouth over time evolved into what we now know as baleen.”

About the same time that whales began to develop baleen, about 30 million years ago, they began to grow in size. Truly gigantic species, such as the blue whale, did not reach their immense size until three million years ago.

Janjucetus was only three metres long.

“These earliest baleen whales, despite the fact that their living representatives are some of the largest animals that have ever lived, they really have relatively humble and quite ferocious beginnings,” Fitzgerald said.