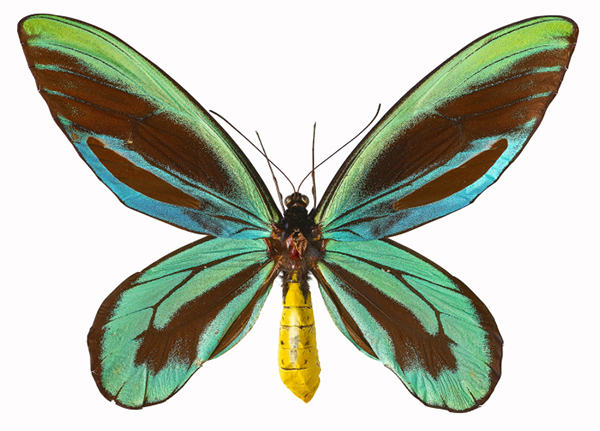 An ornate brooch embedded with an ancient trilobite fossil. A Martian meteorite. Creatures both familiar and long extinct. Melbourne Museum’s grand new exhibition, Treasures of the Natural World, features an extraordinary array of more than 200 handpicked, priceless items drawn from the vast collection at London’s Natural History Museum. Each has a story to tell about life on earth as well as the personalities who discovered them and shaped our understanding of the natural world. Rebecca Carland, Museums Victoria’s senior curator of history of collections and senior curator on the exhibit, talks us through five key items.

Charles Darwin’s Birds
Darwin’s theory of natural selection was inspired, in part, by examining mockingbirds in different parts of the world. On his formative travels in the 1800s, Darwin compared specimens from Chile with those found on the Galapagos islands over 3000 kilometres away, noting stark differences between the isolated island dwellers and their mainland relatives. Some of these very birds will be on display. “I’m so looking forward to seeing them up close and personal,” says Carland. “You get to see the exact specimens that he was working on when he changed the way we understand our existence.”

The Baryonyx Claw
The Baryonyx Claw is an enormous fossil from a crocodile-like creature that stood on two legs and slashed at its prey with this fearsome in-built weapon. A relatively recent discovery from the 1980s, it was uncovered in England and is thought to be 125 million years old. “It’s terrifying and awesome at the same time,” says Carland. [It] elicited similar levels of excitement from my 12-year-old son as it did our resident palaeontologist.”

The Queen Alexandra’s Birdwing Butterfly
The Queen Alexandra’s Birdwing Butterfly is the biggest butterfly in the world, boasting an impressive wingspan of 30cm. Native to Papua New Guinea, it is only found in the trees of Managalas Plateau in Oro Province, where, as a caterpillar, it feeds on a single kind of vine. “It’s an amazing example of how First Peoples are leading the conservation of the species,” says Carland. “In this tiny, 360-hectare plateau, there are about 22,000 people, made up of 152 clans. They work together to protect the habitat because they so love and adore this butterfly species.”

Mary Anning’s Ichthyosaur
Mary Anning was just 12 years old when she made her first fossil discovery in Dorset, England in the early 1800s. “Her discoveries were some of the most significant advances in European palaeontology,” says Carland. A highlight of Anning’s discoveries is a 200 million-year-old ichthyosaur – which was a dolphin-like creature that would have hunted the oceans that once covered Britain – and will be on display. “A lot of the exhibits focus on moments that changed the way we understand the natural world,” says Carland. “Therefore, they also focus on the people ¬– often men. We’ve tried to elevate some of the other voices – women and First Nations collaborators.”

The Hummingbird Case
In 1851, millions of people flocked to the Great Exhibition in London. One of the hottest tickets in town was John Gould’s display of “exotic” hummingbirds, housed in gold-gilted, glass, hexagonal cases. “This is one of the 24 cases that were in that exhibition,” says Carland. In her research, she also came across an interesting piece of trivia: “Charles Dickens wrote for a magazine called Household Words, believe it or not,” she says. “And he covered the exhibition. Even he called them ‘glistening, feathered jewels’.”

While the case is beautiful and the story interesting, Carland says the hummingbird specimens within are an example of the ongoing scientific value of museum collections. As hummingbirds only live at certain elevations, climate change scientists now use these specimens to compare with modern birds to see if their elevations are changing due to climate change.

“The exhibition captures the essence of the collection and scientific work of the Natural History Museum,” says Carland. “And by extension, the importance of all museums, including ours, in helping us understand the deep connection we have to the environment. But also to each other ¬– past, present, and future.”