You are here: Home » Articles filed under: 'News' » Article: 'MV to return korowai to AWMM'

MV to return korowai to AWMM

May 9th, 2019 | Browse other: News. | Tagged with: 128-year-old korowai to be returned to AWMM, Auckland War Memorial Museum, Museum of Victoria | 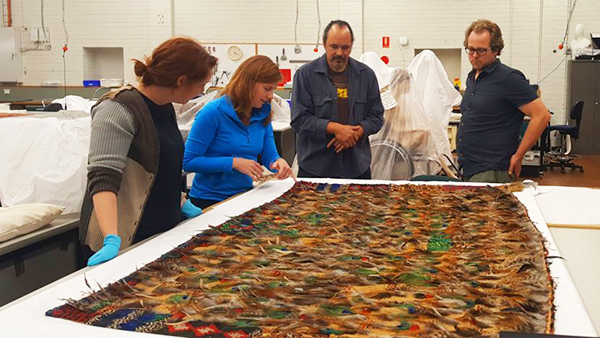 The korowai at the Museum of Victoria in Melbourne. (Photo/Supplied).

A 128-year-old korowai, said to belong to the eldest son of a Ngāti Pāoa rangatira, is to be repatriated from Australia to Auckland War Memorial Museum.

In October last year, Miriata Witika-Takerei and her sister Violet Pahuru discovered that the korowai of their great-grandfather Waata Tipa was amongst the taonga held by Victoria Museums in Melbourne.

The sisters were looking for korowai designs online when they stumbled upon it.

“We were just looking for korowai because our whānau was interested in making korowai,” says Witika-Takerei. “My sister came across it and she forwarded it to me.”

Witika-Takerei says they weren’t sure if it was their tupuna’s korowai because the museum had recorded his name differently, “Wata Tepa”.

“I did a bit of research and asked my whānau and they said ‘nah, it is’ because it comes back to Ngāti Pāoa and he was the son of Haora Tipa Koinaki.  That was our tupuna.”

According to the museum, the korowai was gifted by Tipa to a Mr Stockham in 1891, who then took it to Australia.

Witika-Takerei says it was an emotional experience telling her mother about their discovery.

“I said to her, ‘this is your grandfather’s korowai’ and she was really crying, she was very emotional,” says Witika-Takerei, “She was so happy something of her mother’s whakapapa has come back to her.”

The whānau says Victoria Museums have been incredibly helpful and are keen to ensure the whānau are involved in the repatriation process.

“As soon as we made the initial contact, they were overwhelmed, they were wrapped,” says Witika-Takerei, “I got these beautiful emails from them from the very start.”

Witika-Takerei says the whānau have decided that the korowai would be best cared for at Auckland Museum.

“My mother and the whānau made the decision that it should go back to the museum to preserve it for future generations.”

The whānau says “it’s important to hold a pōwhiri in honour of this beautiful taonga” and plan to welcome the korowai home at Kerepehi Marae near Thames.  This is where they say their tupuna’s wife, Te Ata i Rehia, and three of the couple’s four children are buried.  However, they are at a loss as to the exact location of their tupuna’s resting place.

The whānau are hoping both museums will commit to an end of June return of the korowai but say they may have to postpone the homecoming if they cannot raise enough funds to cater for the 400 or more people they estimate will attend the pōwhiri.

Witika-Takerei says, “Unless we get funding within the next week or two, we will have to postpone the homecoming of our korowai and ask Australia to hold [off] until November when we hope to have all the costs on our end covered.”

The whānau says they have approached several agencies and organisations for funding but have been hampered as they do not have a formal whānau trust.  They estimate that about $40,000 is required to host the manuhiri over a three day period.

The whānau says “Kerepehi is a humble marae”, they say it’ll be necessary to hire equipment such as marquees, portaloos, cooking equipment and a number of other amenities.

Witika-Takerei says the Australians have been incredibly supportive, with the Museum of Victoria covering the travel and accommodation costs of her mother and two other whānau members who will travel to Australia and accompany the taonga home.

The museum is also organising traditional Aboriginal and Māori ceremonies in Melbourne for the safe passage of the korowai to Aotearoa.

She says, “All I want New Zealand to do is pay for the pōwhiri.”