You are here: Home » Articles filed under: 'News' » Article: 'MV: Under fire – The animals threatened'

MV: Under fire – The animals threatened

A Metallic Green Carpenter Bee peers out of its nest carved from the trunk of a banksia tree. Image: Remko Leij

If there’s one place in the world that knows about extinction, it’s a natural history museum.

At Melbourne Museum, our collection stores are full of creatures which no longer exist.

But museums are also home to scientists who fight extinction.

In the wake of Australia’s catastrophic 2019/20 fire season, many of those scientists fear the number of species found only in museums has suddenly grown.

Koalas, echidnas and gliders are among 33 mammals listed by the Australian government in February as the ‘highest priority’ conservation targets following the fires. 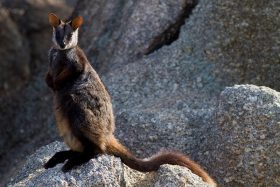 There are only two populations of Brush-tailed Rock-wallabies in Victoria, both of fewer than about 30 individuals—fire has menaced their remaining habitat. Image: Heath Warwick

Museums Victoria mammalogist Kevin Rowe says more than 50 of the 70 species of land-based mammals living in Victoria were impacted.

‘There are entire species that could be threatened with persistence in the state of Victoria,’ he says.

And it is not only mammals in the line of fire. A total of 113 animals topped the official list for ‘urgent management intervention’—and our own experts have identified many more species which may face an existential threat.

The largest bee of southern Australia carves its home out of the soft, dead heart of banksia trees and the flowering spikes of grass trees.

Prior to European colonisation, the Metallic Green Carpenter Bee was as widespread as its habitat—it ranged from southern Queensland down the east coast and into South Australia.

But as its banksia woodland disappeared under agriculture and suburbia, so too the bee.

The last Metallic Green Carpenter Bee specimen in Victoria was collected in 1920. It has also been declared extinct on mainland South Australia.

Kangaroo Island was the bee’s last refuge south of the Murray—it has also persisted in pockets of NSW.

In 2019, efforts to conserve Kangaroo Island’s bees were on the cusp of success. Of 440 artificial nests installed on the island’s western side, 160 had been taken up by the carpenter bees.

The bees reproduce once a year, and so, a significant population increase appeared imminent. Until disaster struck.

The fires which ravaged Kangaroo Island not only decimated the bees’ remaining natural habitat, it also destroyed every one of those 440 artificial nests.

Which is why he is not only concerned about the Metallic Green Carpenter Bee.

The forests of Gipplsand in north-east Victoria are a frog hotspot. Gipplsand not only has the greatest diversity of amphibians in Victoria, it is home to species found nowhere else on Earth. 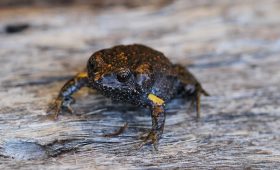 The Martin’s Toadlet is only found in Gippsland Victoria and NSW border area. Image: Andrew O’Grady.

Museums Victoria herpetologist Jane Melville has been surveying the frogs of Gippsland since 2016.

Her study sites are in the Croajingolong National Park, near the town of Mallacoota. By January 11, 69 per cent of the park had burnt—and fires have continued to burn in the area in the weeks since.

But Jane’s previous experience with frogs and fire make her most concerned about what happens after the embers have cooled.

In 2009, Jane returned to a separate frog survey near King Lake—in the Yarra Ranges to the immediate north-east of Melbourne—after the area was ravaged by the infamous Black Saturday fires. 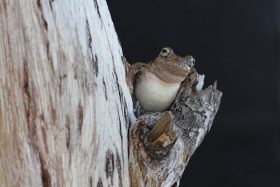 Peron’s Tree Frog is found in Gippsland and large swathes of south-eastern Australia—Dr Jane Melville is concerned about the longer term impacts of these fires. Image: Andrew O’Grady.

While she was pleased to find frog numbers bouncing back—DNA testing back at the lab told a more troubling story. The frogs were far less genetically diverse—basically, they were inbreeding.

Over the last two decades, chytrid fungus has decimated frogs around the world, driving many species to extinction.

Now, with fire having ripped through the heartland of Victoria’s frogs, Jane fears more species could follow suit.

And she holds grave fears for one little-known frog.