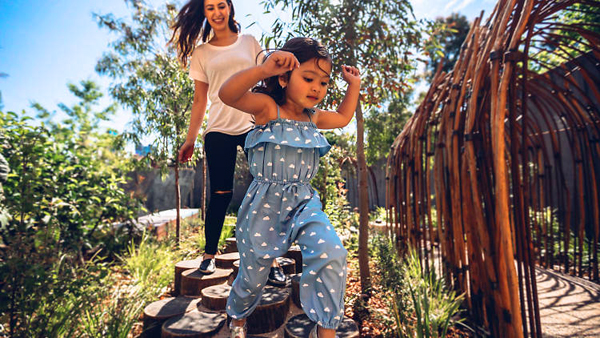 Late last year Melbourne Museum expanded to include a gallery designed for small children, from babies to five year olds. The space was designed with the help of more than 500 child ‘consultants’ and over 100 specialists from fields such as education, special needs, landscape design and playground creation. In doing so, they’ve since set a new standard in early childhood learning.

When awarding the Victorian Museum Award for large museums (categorised as having 51+ paid staff) last night, the judges noted that the Pauline Gandel Children’s Gallery is a gallery “that is leading the way in capturing the early learning, young children and family audience, ultimately converting that audience into long-term museum goers.” And walking through the exhibition space, it’s not hard to see why.

Visitors can walk in the shoes of a palaeontologist at the Dinosaur Rig or dance the morning away at the Camouflage Disco, complete with a mirror wall, light projections and unique soundscapes. There’s also a three-metre high net climbing structure, a one-third life size model of the Victorian Railway’s first C-class steam locomotive, Indigenous storytelling featuring the First Nations creation stories, quiet spaces and murals from street artists David Booth, also known as Ghostpatrol.

Check out what makes it great here. And here’s another reason to celebrate: the gallery is offering free memberships to all children born, adopted or fostered in Victoria in 2017.