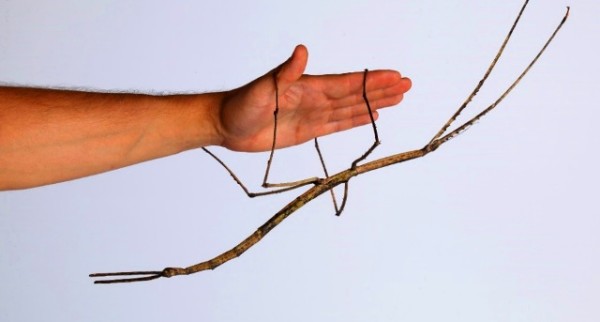 Museum Victoria is excited to announce a world first success: the first generation of captive-bred Ctenomorpha gargantua (Australia’s – and possibly the world’s – largest stick insect) have been reared to adulthood at Melbourne Museum and have just laid eggs of their own.

This is the first time in the world that a member of this elusive species has been successfully reared to adulthood in captivity and has laid their own eggs. This means that Museum Victoria is the first and only institution worldwide to have a breeding colony of this species, an important step to securing the species’ survival, of which only three females have ever been found in the wild.

The current breed of Ctenomorpha gargantua at Melbourne Museum were hatched from the eggs of the largest stick insect ever discovered in Australia (nicknamed by her keepers Lady Gaga-ntuan, or Lady Gaga for short!) who measured 50.0cm in total length. Lady Gaga was discovered near Cairns in January 2014; her record as Australia’s largest stick insect however has now been broken by one of her female children who is 56.5cm in total length.

As the first ever adult female to become part of a breeding program, Museum Victoria’s Live Exhibits team were dedicated to ensuring that Lady Gaga’s eggs, laid at Melbourne Museum shortly after she arrived, were hatched and then reared to adulthood.

This painstaking and laborious process was undertaken by Museum Victoria’s Maik Fiedel, Coordinator, Live Exhibits. Maik made the initial discovery of Lady Gaga and has carefully shepherded her young through from hatching, the troubled teenage years, to adulthood.

Maik even needed to rear the nymphs from home during difficult times as they required ‘around the clock’ monitoring to ensure their continued health and vitality. As Maik says, “It’s great to see these incredible creatures finally mature to the point where they are laying their own eggs. It’s been a tough journey over the last 18 months so we’re really excited to see what happens next.”

On the importance of the breeding program, Patrick Honan, Manager of Live Exhibits says:

“Gargantuan stick insects live high in the canopy, are very well camouflaged and highly sedentary so it’s no surprise so few have ever been found. For a species that’s so rarely seen, it’s wonderful to have even a few live specimens in captivity. Research into captive breeding is essential for the long-term security of many species, and having them on display enables everyone to appreciate the amazing creatures we have in our world.”

The Live Exhibits unit of Museum Victoria create living galleries and interpretive collections to provide enriching experiences through interactions with live animals and plants. As experts in their field, this captive breeding program of such a rare creature is an example of some of the best small animal husbandry in Australia.

This is a world first conservation success story from right here at Melbourne Museum!

Members of the public are invited to view Ctenomorpha gargantua which is now on temporary display for a limited time at Melbourne Museum’s Discovery Centre.