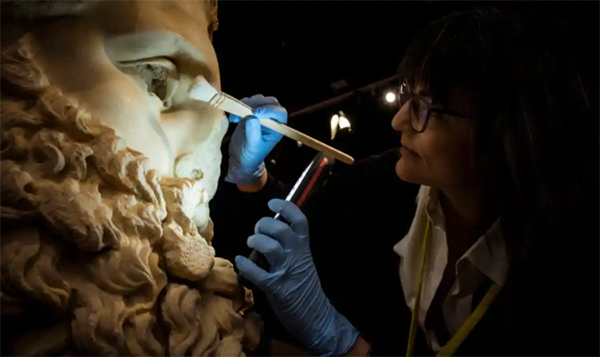 The head of Zeus, weighing 400kg, is checked over by Kalliopi Tsakri, conservator of antiquities at the National Archaeological Museum Greece. Photograph: Christopher Hopkins/The Guardian.

A 400-kilogram sculpture of Zeus is centrepiece of exhibit exploring connections between the ancient civilisation and modern culture.

More than 20 Ancient Greek artefacts that have never left the Mediterranean country before will be displayed in Melbourne as part of an exhibition on the history of the civilisation’s legacy and its impact on modern culture.

Melbourne Museum will exhibit 44 objects in total from the National Archeological Museum in Athens for its Open Horizons: Ancient Greek Journeys and Connections exhibition.

The exhibit’s centrepiece is a 400-kilogram sculpture of the Greek god Zeus.

A marble sphinx statue – excavated at Spata, in Attica, in the 19th century – is one of 23 artefacts that have never been displayed outside Greece before. Made during the Mature Archaic period, the statue is one of the earliest known Archaic Sphinxes. 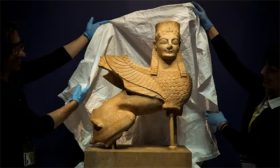 The pieces represent separate themes, guiding visitors through the ancient Greeks’ trading of ideas and goods and its influence on culture. The items date from the Early Bronze Age to the Roman period.

Linda Sproul, director of exhibitions and experiences at Museums Victoria, said the exhibit told “a story of cultural exchange between and across peoples and communities”.

“This idea of people journeying and exchanging ideas and connections and trading together or having spiritual belief together, that didn’t stop 3,000 years ago. So the really wonderful thing about exhibitions like this is it allows you a chance to kind of step out of time, and to think about all of the time that humans have been around, and how there are connections across years, and centuries and millennia.” 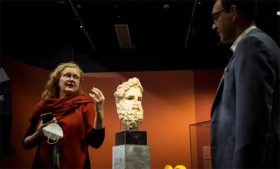 The state government secured Open Horizons following a trip by the premier, Dan Andrews, to Greece in 2017, which began the discussion with the previous government about improving cultural exchange between the two countries. The state government made a $2m investment in the exhibition in last year’s state budget.

Oakleigh MP Steve Dimopoulos is one of five state parliamentarians with Greek heritage and he travelled with Andrews. He said the exhibit had a special significance for Victoria’s Greek diaspora, with the state home to the largest concentration of Greeks outside the country in the world.

“Grandparents and parents can bring their children and grandchildren here to touch and feel the civilisation that they’ve so talked about and heard and been engrossed in. They don’t have to jump on a plane to Athens. They can see it right here in Carlton in Melbourne Museum,” he said.

Kalliopi Tsakri, conservator of antiquities and works of art at the National Archaeological Museum, said all of the artefacts were transported using rubber-lined crates to ensure they were protected from road and aeroplane vibrations on their journey from Athens.

Tsakri is part of the National Archaeological Museum’s team that travelled from Greece with the artefacts and has installed them in Melbourne.

The National Archaeological Museum is the largest museum in Greece and among the most prestigious in the world.