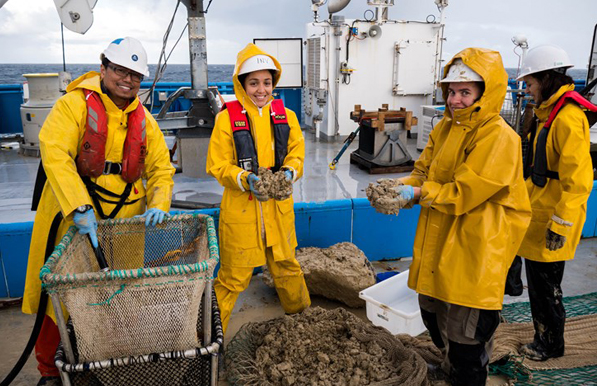 A blob fish, a shortarse feelerfish, zombie worms and a herd of sea pigs are just a few of the bizarre creatures found in the deep.

One of the most unexplored ecosystems in the world,  the deep sea, is brimming with new species both ancient and unique that call the deep, dark abyss home.

The team from Museums Victoria discovered an array of spineless, faceless creatures never before seen by the scientific world.

So what did they find?

The ‘faceless fish’ was rediscovered on the journey, a deep sea fish with no visible eyes and only a mouth hidden underneath its head. The obscure looking fish was a global sensation and quickly became a viral star. The faceless fish’s fame was closely followed by the phallic looking ‘peanut worm.’

The month-long exploration comprised of 58 scientists and a team of technicians and crew from fourteen institutions across Australia and the world. The vessel was aptly named the Investigator.

Dr Tim O’Hara, the mission’s chief scientist and senior curator of the Marine Invertebrates from Museums Victoria explains the significance of their journey to the abyss:

‘Australia’s deep-sea environment is larger in size than the mainland, and until now, almost nothing was known about life on the abyssal plain. We’re really excited about the discoveries that we’ve made and are thrilled that we can now share them with the Australian and international public.’

Some of these bizarre looking creatures will be able to be seen at Museums Victoria in the next few months; the rest will be stored in the Museum’s natural science collection.

Some of these bizarre looking creatures will be able to be seen at Museums Victoria in the next few months; the rest will be stored in the Museum’s natural science collection.

The team’s mission was twofold. An exploration of deep sea and the creatures that inhabited it and an investigation of pollution that may lie on the sea floor and microplastics on the ocean’s surface. Dr O’ Hara explains:

“We have found highly concerning levels of rubbish on the seafloor. We’re 100 kilometres off Australia’s coast and have found PVC pipes, cans of paints, bottles, beer cans, woodchips, and other debris from the days when steamships plied our waters. The seafloor has 200 years of rubbish on it. Hopefully, information such as this is the first step in influencing social attitudes towards rubbish disposal,”