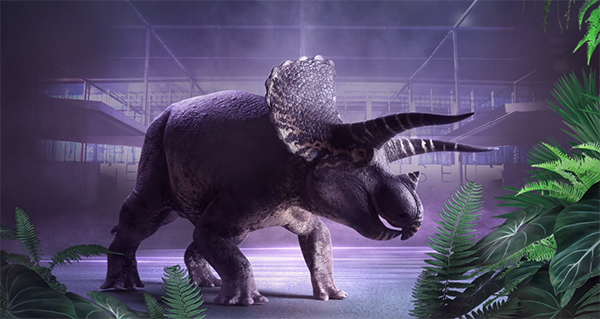 On The Science Show with Robyn Williams

In March 2022, Melbourne Museum presents a new exhibition Triceratops: Fate of the Dinosaurs. It includes the most complete known fossil of the dinosaur Triceratops. The fossil is 67 million years old, 85% complete and was found in Hells Creek Montana USA. The creature is 3 metres tall, weighs 12 tonne and was a cute and friendly vegetarian. Museums Victoria director Lynley Crosswell describes the exhibition and the wider approach of Museums Victoria.

Robyn Williams:  Well, I don’t know whether the monster sounded quite like that, but it certainly looks horrendous. One of the biggest monsters you can imagine, and you’ll see for yourself in just a few days. Triceratops, twice your height, weighing up to 12 tonnes, but it was a vegetarian and for all I know may have been perfectly sweet natured. But those horns! Lynley Crosswell is CEO of the Museum of Victoria, its new home.

Lynley, you have Triceratops waiting for us with a major exhibition on dinosaurs. What could we expect to see?

Lynley Crosswell: I personally think it’s one of the most awe-inspiring objects that you will ever see in your lifetime. We have the most complete Triceratops fossil on display from 12th March at Melbourne Museum. And, Robyn, it really is one of those things that distorts the mind because you think 67 million years old, yet here it is, and it’s over 85% complete. It really is one of those awe-inspiring moments.

Robyn Williams: Where did it come from?

Lynley Crosswell: Well, he came from Montana and was discovered in a place called Hells Creek in the Badlands of Montana. So Horridus has a great story, and the scientists believe that Horridus was probably buried under sediment, and that has contributed to the quality of preservation.

Robyn Williams: Now, you’ve titled this not just ‘Triceratops exhibition’ but ‘Fate of the Dinosaurs’. How do you include that?

Lynley Crosswell: Well, we think that there is a bigger story to tell than Triceratops itself. Horridus’s story is of course unique and remarkable. However, what can Horridus tell us about life as it was, but also life as it is now? So, as we look at what happened back then when Triceratops lived, we go on a journey which connects us into today’s world and the descendants of dinosaurs today which are birds, and have a look at the environment that they are in. And what we believe really strongly, that it’s important to connect our visitors not just with what happened in the past but what it means for today and therefore how they can take that knowledge and information forward to contribute to the environment today and the creatures that we live with now.

Robyn Williams: I’ve heard a rumour that you are teaching Triceratops to talk.

Lynley Crosswell: I don’t know where you got that from, but not me personally, I’ll just leave it there.

Robyn Williams: All right, well I shall investigate next week and see what we can find. Lynley, you are an innovation specialist and you did this at the ABC and you’re looking at the ways in which museums and various other parts of the interaction between the public and science can be brought forward. Museums (and this is something that always struck me) are just about the best place to interact with the public, and you can’t go off the street to universities, and most the buildings are locked. You can go to the gallery in Melbourne, which has a science gallery, but essentially it’s the best place to go. So what are your plans for the future of your museum?

Lynley Crosswell: We want more and more opportunities for the public to experience that highly engaged, interactive type of experience that you’ve just outlined there, Robyn, and across Melbourne Museum and Scienceworks and the Immigration Museum. And you’ll see in the Triceratops exhibition that we really have combined more traditional museum display experiences with highly contemporary digital display and interaction. And in fact when you walk in you are fully immersed in the world where Horridus lived and the creatures Horridus lived alongside. You literally are transported. It’s really quite a transcendent experience, if you like, we put it that way. And then you are face-to-face with Horridus and then transported back into today. So those types of experiences you can expect to see more of. We have seven major new exhibitions and experiences planned for opening across our museums this year alone.

Robyn Williams: Yes, I was most impressed when I went to Scienceworks a couple of years ago where I saw a gallery based on space and frontiers of physics that was actually designed by the teenagers. You are obviously underway, so thank you very much indeed and I look forward to meeting Triceratops.

Lynley Crosswell: Thank you, Robyn, it’s a pleasure to chat with you, as always.

Robyn Williams: Lynley Crosswell is CEO and director of Museums Victoria. And Horridus will be expecting you in just a few days.