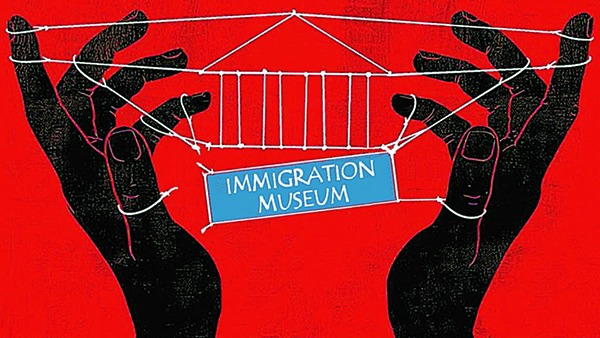 Concerns raised over the proposed re-naming of the Immigration Museum

A report appeared in the Herald Sun on July 19 that alerted readers to a proposed name-change for the Immigration Museum to Museum of Shared Humanity.

The Immigration Museum’s current exhibition, ‘Our Bodies, Our Voices, Our Marks’ is a “tattoo trip around the world from Samoa to Japan and back to Melbourne.” The exhibition is a marker for the Museum’s new direction “moving away from stories exclusively about immigration to exploring the idea of human connection, especially as a global counterpoint to intolerance and racism.”

The exhibition is “not about travellers making their way to Australia to start a new life.”

The Immigration Museum was founded in 1997 to represent the migration and settlement stories of diverse communities in Victoria. The Museum’s website states there has been “consultation in the past 18 months with government bodies and members of our community.”

Neos Kosmos talked to Greek, Italian, African, Indian and Jewish media, the Greek Community of Melbourne, Victoria, and key stakeholders who said they were not consulted, or knew nothing of consultations.

Jorge Menidis the Director of the Greek Cultural Centre and the Lonsdale Street Festival, expressed “surprise and disappointment.”

“We read on the Immigration Museum’s website that they had 18 months of consultations with communities and we – one of the largest in Victoria and one that partnered with the Museum in its foundation – were ignored.

“Immigration is a current global issue and a historical one, over 300,000 Greek immigrants arrived and settled in Victoria in the post-WWII period between 1949 and 1975.

“Recently we have had an additional 20,000 young Greeks who came in the wake of the Greek Financial Crisis,” said Mr Menidis.

“The aim must and always be to permanently honour, preserve and showcase our shared immigrant heritage and in doing so, work closely with all communities in Victoria,” he said.

Mr Lekakis called on the Victorian Government to “recognise that it’s time for the Immigration Museum to have its own board and manage its own resources, dedicated solely for the purposes this iconic institution was originally established.”

“The Immigration Museum may wish to change its programs and operations, but it should do so without changing its name,” Mr Lekakis underlined.

Mr Lekakis, the former Chair of the VMC, stressed that; “You can investigate anything you wish under any theme, as long as it is in the context of immigration and settlement of people who have made Australia their home.

He also recognised that the Museum had been suffering from poor resources however said, “This current debate about the future of the Immigration Museum can be directly attributed to the years of neglect that this important institution in Victoria has suffered.”

Mr Romaniw agrees. “Having chaired the VMC at the initial planning of the Museum, the purpose of the Immigration Museum was clear, it was to reflect our migration history, and this should not change,” said Mr Romaniw.

He called for an end to “other engineering” and stressed that the mission of the Museum was to “respect our collective migration history.”

Mr Romaniw thought “this is a black and white issue so let’s not make it grey”.

“As the Vice President of the Ukrainian World Congress I have witnessed how in other countries the immigration story is cemented via immigration and migration museums and we need now a clear message from the Museum.

“The only consultation Museums Victoria should undertake is to enhance this precious jewel in Victoria’s history.”

Like Mr Lekakis, Mr Romaniw believes that, “If the Museum can’t make it work the State Government should form an independent body to manage this community asset.”

He emphasised how that as the past chair of MAV, he and others presented the Museum with “a viable proposal, the House of World Cultures, which would bring in the communities and the broader Victorian Public”.

Mr Romaniw then pointed to MAV’s successful Mix It Up program at the Arts Centre, “You can bring bums on seats if you work with Victoria’s multicultural communities, not as silos but as partners.”

Dr Hass Dellal OA, the Chief Executive Director of the Australian Multicultural Foundation, (AMF), Chair of SBS, and a member of the Museum’s first advisory board stressed to Neos Kosmos that, “The Immigration Museum is an institution that should remind us of the contribution of immigrants to our social, cultural and economic well-being.

“The Museum can run programs promoting multiculturalism, inclusiveness and social cohesion – themes of shared humanity and harmony are fine – but the name must stay.
“I was one of the first members of the advisory committee formed to develop the Museum, and the AMF has consistently worked with the Museum in representing diverse programs over the years.”

Lynley Crosswell the CEO and Director of Museums Victoria, in discussion with Neos Kosmos, said that what appeared in the Herald Sun “was a leak and was taken out of context.” She stressed that Museums Victoria, “have no intention at this stage on name change”.

Ms Crosswell called the leak “unfortunate” and a “distraction”.

The Museums Victoria CEO expressed her desire to bring communities to the table. “We need the guidance and advice of the established and traditional communities,” she said.

“The name is the least of our concerns, what we want is to get the right content and experience there, so that people are coming regularly to that Museum.

“We are engaged in a long-term project aimed at revitalising the connection our community has with the Immigration Museum.”

Over the years attendance numbers to the Immigration Museum had fallen. Rohini Kappadath the Immigration Museum’s General Manager was entrusted with the role and mission to revitalise the Museum. Ms Kappadath is behind the Museum’s recent exhibitions such as ‘LOVE’, “which traverse time, gender, orientation, ethnicity, age and distance,” according to Victorian Government website.

Ms Crosswell said that since ‘LOVE’ opened in December 2018, the Museum saw a 17 per cent increase in visitation against their three-year average. “The whole team is really proud of this uplift,” said Ms Crosswell.

“In 2018-19, the museum welcomed 135,000 visitors through its doors, its second-highest annual attendance since opening.
“This represents an 15 per cent increase on our 2017-18 visitation and this contributed to a 36 per cent increase over last year’s admissions revenue.”

Ms Crosswell was emphatic that there will be another year’s consultation and that the Museum will explore themes that unite all Victorians.

“We are really delighted that so many communities cared, in many ways this was great, people are talking,” she added.

Ms Crosswell made it her “personal agenda to support Ms Kappadath with conversations with the Greek, Jewish, Italian and other communities, especially as there has been interest and concern expressed”.

Maria Vamvakinou, the Federal Member for Calwell, speaking to Neos Kosmossaid the Immigration Museum was “established to document, commemorate and honour the history of contemporary multicultural Australia.”

She emphasised “its purpose is – and must remain – the custodian of Australia’s immigration history.”

“To change the name of the Immigration Museum is to begin the eradication of a significant part of our nation building history.

“It is an affront to the post-war migrants who built this nation, and it will diminish the cultural contribution they have made to the formation of Australian multicultural identity.
“And it will deny current and future Australians from having the opportunity to learn about their nation’s migrant history.”

Neos Kosmos sought comments from the Minister for Creative Industries, Martin Foley who said: “The Immigration Museum has been sharing the stories of Victoria’s multicultural communities for more than 20 years and will continue to do so for many years to come. The importance of bringing all multicultural communities along during the ongoing consultation process has been made clear and the museum will consult with all those involved over the coming months. No changes to the museum’s name, exhibitions or other operational matters have been decided or finalised.”

The Minister made clear that “any new initiatives will be in addition to the longstanding work it does in collaboration with our multicultural communities, with their stories and history continuing to be at the heart of what the museum does.”