You are here: Home » Articles filed under: 'News' » Article: 'MV’s meet the experts:' 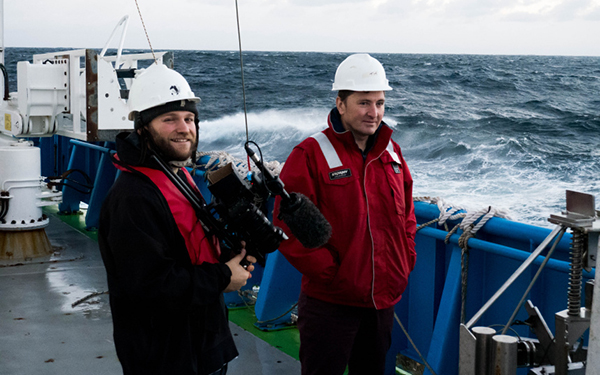 From mapping the biodiversity of deep-sea abysses, to investigating suspiciously glowing calamari, Dr Tim O’Hara sees more left-field excitement than your average marine biologist. In partnership with Museums Victoria, he explains how his research helps us understand (and conserve) the diverse ocean life around Australia for future generations.

O’Hara is the senior curator of Museum’s Victoria marine invertebrate collection. In 2017 he and his team made international news for their deep-sea abyss research exhibition exploring the unusual life flourishing four kilometres below the surface of the ocean around Australia. “The abyss,” according to the expedition’s website, “is the largest habitat on the planet, covering half the world’s oceans and one third of Australia’s marine territory. It is thought to be a major reservoir of biodiversity and abyssal animals have been around for at least 40 million years.”

The results of the expedition were blogged extensively and included ultra-rare creatures as well as evidence that new species are evolving most rapidly in Antarctica.

O’Hara doesn’t just specialise in identifying obscure species. He and Museums Victoria use their data to map out ideal habitats for marine life in order to best conserve it. “Museums have always had a really important role in identifying and describing Australia’s biodiversity,” says O’Hara. “If you want to know what species an animal is, then a museum is the place to find out.”

We asked O’Hara to give us an overview of his work – including the weird stuff.

How would you explain your job to a layperson?
Increasingly, my work focuses on explaining how Australia’s unique marine animals have evolved and how they can be protected. For example, when did Australia’s animals become different to those elsewhere? Why do some species prefer the deep sea? What animals occur in areas that may be damaged by human activities?

What drew you to this area of expertise?
I have been interested in the small critters of the marine world since I was in high school. I was amazed at what occurred around Australia’s coastlines.

When I finally came to be a curator, I began to map exactly where species lived on a large scale. First I mapped marine life around Australia, then the southwest Pacific Ocean, then all over the globe. I love using these millions of facts to build a story about how life works and how it needs to be protected.

What have you worked on recently?
In 2017 I was the leader of a scientific voyage to explore the “abyssal” environment of the deep sea floor off eastern Australia. We discovered an amazing world of weird animal life. Most famous was the Faceless Fish, which achieved global media coverage.

What is the strangest thing your job entails?
I go on ships that explore the deep sea. These are large research vessels: nine stories high, with a crew of 60 scientists, technicians and engineers. They are like noisy floating factories.

Once someone called in [to the museum] saying they had discovered a mermaid corpse. It turned out it was a dried fish buried in a wooden box. No idea why. Another time someone rang worried about the green glow coming off their calamari leftovers. They were worried about radiation (like on The Simpsons), but it turned out the green light was from phosphorescent bacteria. The calamari wasn’t radioactive, just off.

Read about the headline-making discoveries from Dr. O’Hara’s Sampling the Abyss voyage and take a virtual tour of Victoria’s marine life, among other highlights from National Science Week.