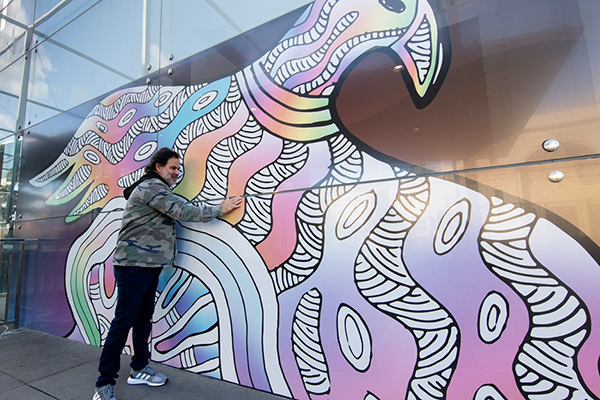 Tati Tati artist Brendan Kennedy with his Wiripil artwork at the entrance of Melbourne Museum.

Birthday honours: 21 of our favourite things about the Melbourne Museum, Museums Victoria, October 2021

The Melbourne Museum is 21 years old!

And by that of course we’re only referring to the building in Carlton itself—the museum has existed in a few different guises and locations across Melbourne since it began in the 1850s.

While a 21-year-old building could be considered youthful, it is still enough time to accumulate some stories and conceal others from long before.

So, let’s get to it: 21 fascinating facts about the Melbourne Museum.

1 A significant site for First Peoples

Melbourne Museum stands on the lands of the Wurundjeri people.

21 years as a museum is a drop in the ocean compared to the thousands of years of cultural significance that precedes it.

All visitors to the museum are welcomed by Uncle Brendan Kennedy’s Wominjeka artwork, featuring a soaring Bunjil|Wiripil and Waa|Wangi, in recognition of this fact.

2 The site used to be a car park 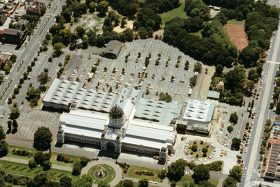 Not the best use of space and a bit of an eyesore—the carpark circa 1990.

Yep, and it looked exactly as attractive as it sounds.

The site has always adapted to meet the needs of the day, with the Royal Exhibition Building’s sprawling complexes of annexes being continuously torn down and rebuilt.

As cars become more popular, the western and northern sections of the site were turned into car parking.

Fortunately wiser, and much more imaginative heads prevailed and the carpark was moved underground during the museum’s construction.

3 It also used to be a racetrack 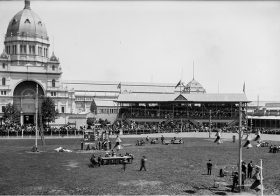 First it was a cycling velodrome, then a full-blown motorsport racetrack.

The racetrack, known as the Melbourne Exhibition Speedway, operated from 1928 until 1936 and is considered the birthplace of motorcycle sidecar speedway racing.

Hard to imagine the cacophony of motorcycles fanging it around there now, though, isn’t it?

4 The Carlton Gardens wasn’t the first choice of location 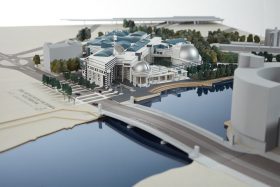 Most people know the last location of the Melbourne Museum was on Swanston Street—the same building that the State Library of Victoria continues to call home.

But in the decades before that move a few locations were floated as the museum’s next home, including King’s Domain, Queen Victoria Market and Southbank.

In the 1990s, construction of a new museum even began at Southbank before those works were incorporated into what is now the Melbourne Exhibition Centre.

You may have noticed a similarity in the bladed roof features of the museum and exhibition centre—that’s because they were designed by the same architects, Denton Corker Marshall.

The designers of the Melbourne Museum had to make sure the new museum didn’t overshadow the Royal Exhibition Building.

You know one of the really annoying things about having a World Heritage listed building as your neighbour?

Like some kind of sibling rivalry where the parents favour the elder, the Melbourne Museum was prevented from being any taller so it wouldn’t spoil the view of the Royal Exhibition Building’s dome.

Ok, fine we’re actually quite fond of the iconic golden-tipped dome and wouldn’t have it any other way, but there you have the reason for why the building is as tall as it is, and no taller.

Have you ever been on the forecourt between the two buildings and wondered what those white strips on the raised benches are?

They’re skylights for what lies beneath.

The tunnel extends out from the museum towards the REB, but was never completed.

You may have even been inside the opening on the museum side without knowing it, as it is part of the Road to Zero exhibition space.

7 The Forest Gallery trees had to be craned in 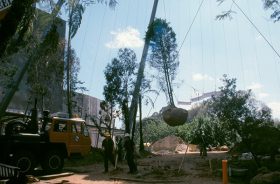 Craning in a native Nothofagus Beech tree in 1999.

It is a bit of an exercise to move mature trees at the best of times, let alone get them into a museum.

The designers of the Forest Gallery had an ambitious plan to replicate the Mountain Ash forests of Victoria’s highlands, using 12-metre-tall trees and salvaged from logging coupes east of Melbourne.

Dozens of trees were planted in the space, to give them time to get used to their new home before the grand opening.

Two decades later, these towering giants regularly have to be trimmed to stop them from growing through the roof.

We hope you’ll agree it is worth all the effort—our staff definitely do, and often cite it as one of their favourite places in the museum.

8 The museum is a quarantine facility

Much like anyone who has travelled during the COVID-19 pandemic, some animals must also submit to quarantine.

The most likely way they end up there, though, is being confiscated by customs officers—as is the case with exotic species like tarantulas and chameleons.

Biosecurity breaches are serious business, and ordinarily these creatures would be destroyed to prevent them becoming an invasive species.

But at the Melbourne Museum these fugitives get a chance to live out their days as part of exhibitions, like Bugs Alive!

9 We have a room full of spiders 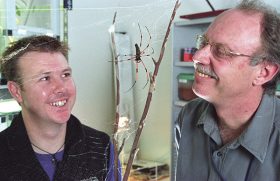 Actually, two—arachnophobes should probably steer clear of this area.

Some species of spider build a semi-permanent home and are not inclined to wander, so we give them the space to do that.

There’s a room back-of-house where species that prefer a more tropical, humid environment are kept in open storage—and yes, that means they’re hanging from the ceiling.

There is also a separate ‘dry’ room for arid species.

The Melbourne Museum has always had a specific place for kids, but five years ago we kicked it up another notch.

The Pauline Gandel Children’s Gallery has become a firm favourite of parents, kids, and staff alike.

This world-class experience was among the first public learning spaces specifically engineered for babies to five-year-olds, in recognition of the importance of play in the early years in learning.

It was even designed in consultation with education experts, parents, and kids themselves!

No wonder it is so popular.

Under normal circumstances, about one-point-one million visitors come into the Melbourne Museum every year—a figure that includes 138,000 students for education programs.

But a lesser-known fact is that the museum’s outreach programs—to kindergartens, aged care facilities and festivals—reaches a further 140,000 people all across Victoria.

So, it’s not just a museum for Melbourne.

12 We have a library 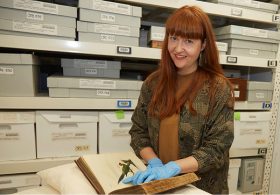 The rare book section doesn’t look like a conventional library. Our manager Hayley takes extra precautions here—some of the books are hundreds of years old!

It might seem slightly odd that a natural history museum, which used to live in a building that is now exclusively a library, would have its own library.

Not only that but Melbourne Museum holds some very rare books—a collection founded by the museum’s first director, Sir Frederick McCoy, in 1854.

One of our favourites is Albertus Seba’s Thesaurus which includes the mythical multi-headed hydra.

The Melbourne Museum has not one, but two copies because McCoy was so dissatisfied with the first black and white copy he received that he ordered it again in colour.

However, he obviously wasn’t too upset about it because he kept the monochrome version.