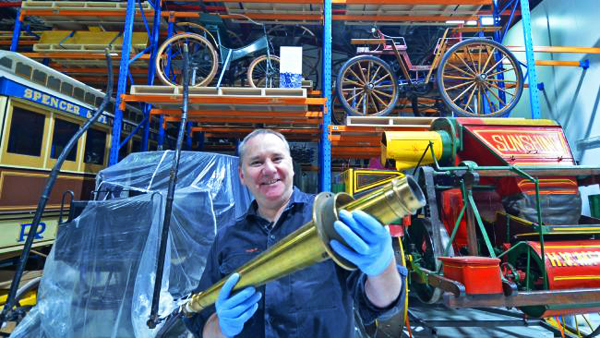 Neville Quick and some of the objects in storage at the Moreland Annexe. Picture: Craig Hughes.

Neville Quick may just have the coolest job in all of Melbourne.

Mr Quick runs Museums Victoria’s Moreland Annexe, an unassuming building in an unassuming suburb in Melbourne’s north, that happens to hold some of the country’s greatest historical assets.

The first plane built and flown in Australia? That’s here.

It shares a bay with an early hang-glider, a couple of replica pterodactyls and some very early cars.

Across the way is a classic green and gold tram nestled next to a cast of a Tyrannosaurus Rex skull.

There’s the trunk of an ancient tree, Olympic bicycles and a very early form of technicolour rotary traffic light that once kept the good people of Brighton safe as they were chauffeured back to their beachside mansions.

The Moreland Annexe is a storage and preservation site for the museum that’s closed to the public.

Exhibits that aren’t on display are stored at the annex or facilities like it.

Museums Victoria has 15 million objects in its collection.

Only about two per cent is on display at any given time.

Every other item needs a home where it can be used for research and preserved for the future.

“They all need care because we want them to be around for the next 200 years,” Mr Quick explains.

“Our collection is like a giant 3D encyclopaedia and we can mine it for data, and we do it constantly.”

The Annexe was first used in 1997 and even though it cover 7500sq m space is increasingly at a premium.

“We’ve been able to maintain space for expansion to 21 years through clever use of space.

“It gets harder and harder with every object.”