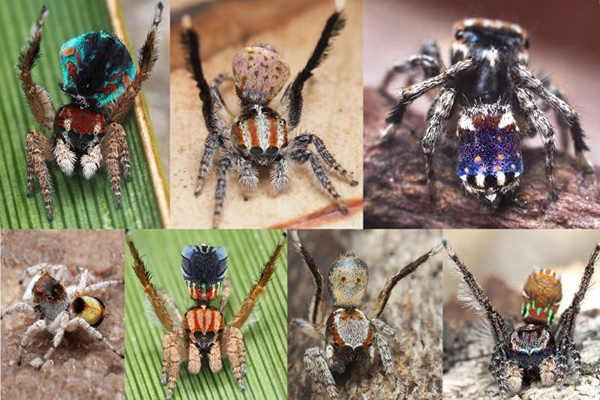 The discovery of seven species of peacock spider — five of them in Western Australia — has shed new light on one of nature’s most colourful critters.

A research paper describing seven new species of peacock spider has been published in the journal Zootaxa by Joseph Schubert, who works for Museums Victoria as a legacy registration officer in entomology and arachnology. 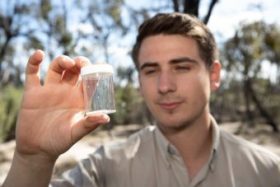 Mr Schubert says a keen eye is required to spot peacock spiders in the bush because they are so small. Supplied: Heath Warrick.

“They have their own personalities and they’re incredibly tiny — about the size of a grain of rice.”

The peacock spider’s reputation as Australia’s dancing spider comes from the courtship ritual performed by the colourful males, which raise their legs and perform a ‘dance’ to impress nearby females.

They are found throughout much of southern Australia, although the south-western corner of Western Australia is considered a hotspot. 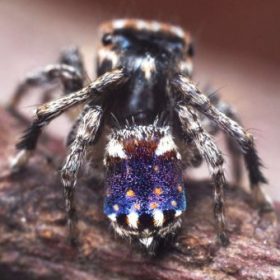 The maratus constellatus is so named because the striking colours on its abdomen are reminiscent of the Vincent Van Gogh painting ‘The Starry Night’. Supplied: Joseph Schubert.

Their size makes them tricky to find in the bush, and even more difficult to observe up close.

“I spend a lot of time on my hands and knees in the field, with my camera and a big lens, zooming in on these tiny spiders,” he said.

Among the new species — and a favourite of Mr Schubert’s — is Maratus constellatus, which was discovered in Kalbarri, nearly 600 kilometres north of Perth.

“To me the colours and the markings on the abdomen look a lot like The Starry Night by Vincent Van Gogh, so I named it constellatus, which means starry in Latin,” Mr Schubert said.

Like many arachnids, peacock spiders are venomous, but they are completely harmless to humans.

Their prey consists of small invertebrates such as flies and moths, but unlike other spiders they don’t use webs for hunting. 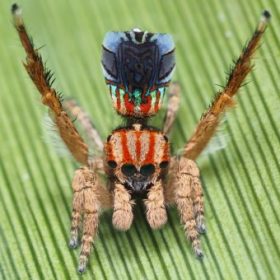 Male peacock spiders, like this marateus azureus, raise their legs and display their bold colours during their trademark courtship ‘dance’. Supplied: Joseph Schubert.

“They slowly approach their prey, trying not be detected,” Mr Schubert said.

“When within jumping distance they pounce — hence the comparison to kittens.

“They’re also incredibly accurate when they jump. I’ve even seen them catch prey in mid-air.”

Given how appealing peacock spiders are, it is surprising that as recently as 2013 there were fewer than 10 recorded species in Australia.

That number now stands at 85, thanks in part to the efforts of passionate citizen scientists across Australia.

Mr Fletcher said he found it satisfying to share his passion for peacock spiders with others.

“I show people a photo and they’re amazed by how beautiful they are, and it’s a spider — something they’ve grown up to hate,” he said.

“I get a buzz from sharing that with people. 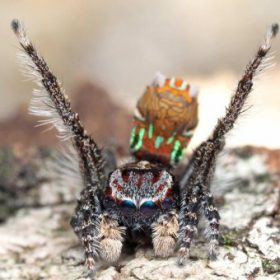 Maratus Noggerup was named after the place where it was discovered — Noggerup in Western Australia. Supplied: Joseph Schubert.

“When you find something you know no-one else has found before, there’s nothing like it. It’s very exhilarating.”

Mr Fletcher said he often drove hundreds of kilometres in search of spiders, and there was always something new to discover.

“You find one and you just get this drive — you just want to find more,” he said.

“I drive a lot for my work, and when I see different bits of bushland, all I want to do is stop and look for spiders.