You are here: Home » Articles filed under: 'News' » Article: 'MV’s Triceratops: Fate of the Dinosaurs'

MV’s Triceratops: Fate of the Dinosaurs 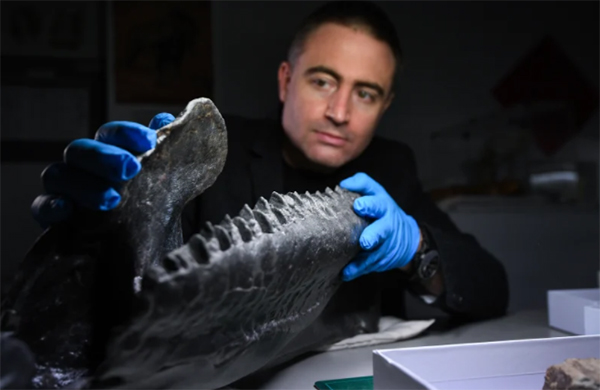 After the tip of a Triceratops fossil was first unearthed by a dinosaur hunter on a ranch in Montana in 2014 it took eight years of excavations, negotiations and painstaking preparations for Melbourne Museum to acquire the fossil and get it ready for display.

The fossil skeleton, which the museum has called “Horridus” in a nod to the dinosaur’s scientific name Triceratops horridus, weighs more than 1000 kilograms and at 2 metres high and 6 metres long is about two-thirds the size of a Melbourne tram. 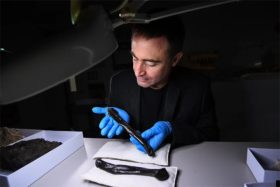 Palaeontologist at the Melbourne Museum, Dr Erich Fitzgerald with some of the Triceratops bones. Credit: Joe Armao.

Its hulking frame which is gleaming and dark black from the minerals and sediment it was preserved in for 67 million years has pride of place in the museum’s newest exhibition set to open next month.

The museum’s senior curator of vertebrate palaeontology, Dr Erich Fitzgerald, describes it as “the most complete, exquisitely preserved Triceratops fossil found in the 130-odd years since the species was first named.”

Melbourne Museum paid almost $3 million for Horridus which it is carefully guarding before unveiling it to the public on March 12 with no photographs or videos allowed of the fully assembled skeleton.

Dr Fitzgerald says it is a globally significant find which he first became aware of after seeing a low-resolution photograph of the dark black backbone of the dinosaur on a 2018 visit to fossil wholesaler and preparatory laboratory Dino Labs in Canada. 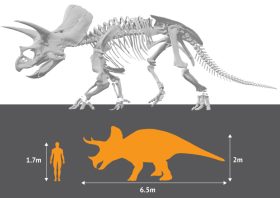 “I looked at the photos … looked back at what was known and realised that’s an unusually complete and well-preserved Triceratops,” he said.

At the time, the Triceratops was in the workshop of Craig Pfister the owner of Great Plains Palaeontology in Wisconsin which describes itself on its website as a “purveyor of fine fossils”.

Mr Pfister discovered the fossil on a ranch in Montana which Dr Fitzgerald describes as “dinosaur fossil heaven” where he has an agreement with the landowner and was on-site to excavate a Tyrannosaurus rex fossil.

Heavy rain meant Mr Pfister took a different route to the excavation site than usual and noticed what was the tip of the pelvis of the Triceratops uncovered by the rain and shining in the afternoon light. 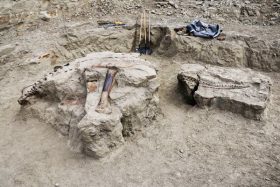 The near-complete fossil of a 67 million-year-old adult triceratops that once roamed Montana. Credit: Heinrich Mallison.

In the US fossils which are found on private land are private property and can be sold, however, Dr Fitzgerald and the museum team had to negotiate a legal and ethical minefield around acquiring the Triceratops fossil.

The most infamous of these is “Sue” the most complete Tyrannosaurus rex fossil ever unearthed which is displayed in the Field Museum in Chicago after an FBI-led task force seized the fossil from the commercial bone dealers who found it and engaged in a custody battle in the US Federal Court.

Dr Fitzgerald says the complex patchwork of land ownership, status and permit requirements meant Melbourne Museum had to spend more than a year undertaking due diligence over who owned what and who even had the legal right to sell the fossil.

Dinosaur hunters and bone dealers are controversial and Dr Fitzgerald says there are legitimate questions as to whether there should ever be the sale of natural heritage such as fossils, but he takes a pragmatic approach.

“A fossil like this would have been sold irrespective,” he says. “I take the view as a professional palaeontologist that we need to make the most of the situation as it is.”

Dr Fitzgerald says a fossil such as Horridus belongs in a museum where it can be studied and seen by as many people as possible.

“By purchasing the fossil, Museums Victoria has brought it into public ownership, making it accessible in perpetuity, not only for scientific research, but for everyone,” he says. “That doesn’t necessarily happen, in fact it often does not happen and fossils like this can disappear into someone’s living room or mantelpiece or an attic.” 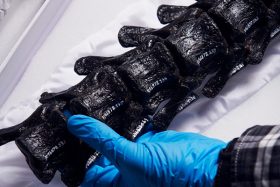 Preparing the tailbone of the Triceratops fossil at the Melbourne Museum. Credit: Eugene Hyland.

Once the deal was done the team at Dino Lab started preparing the dinosaur fossil for transportation to Australia, working with the Melbourne Museum experts remotely via Zoom because of the pandemic.

The Dino Lab team impregnated the fossil bones with an acrylic resin to help strengthen them. The bones were then secured in plaster cases known as field jackets and packed into eight crates the size of cars before being flown to Australia in July last year. 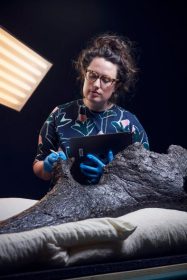 Dani Measday says the fossils are both heavy and delicate. Credit: Eugene Hyland.

Once Horridus arrived a team which at times numbered 40 museum staff got to work unpacking and carefully cataloguing it.

Dani Measday, conservator of natural sciences at Melbourne Museum, was part of the team unpacking and assembling the fossil’s 266 bones which she compares to a particularly complicated and fraught jigsaw puzzle.

“Fossils are really heavy, and they’re also quite unusual shapes and sizes, this really strange combination of incredibly heavy and incredibly fragile,” she says. “They’ve been underground and the ground moves and you’ve got 67 million years of tectonic activity in that area that’s moving the ground and compressing things and crushing things so a lot of them are filled with this network of fractures throughout the bones.”

Concerned that some of the fossil could break under its own weight each piece was carefully cushioned and supported before being registered, catalogued and condition reports prepared noting chemical stability, physical stability and any sign of damage.

The area where the fossil was found has the potential to have naturally occurring radioactive material so museum staff wore protective gear while working with the dinosaur fossil and carefully assembling it piece by piece on an armature to display it.

Any missing pieces were identified and replicas made which were painted in a light grey colour to distinguish them from the actual fossil. 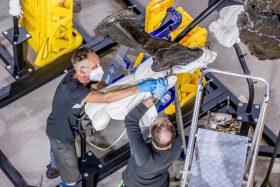 Nine months on, the Triceratops fossil is complete and the finishing touches are being put by museum staff to the displays that will accompany Horridus in the Melbourne Museum’s permanent collection.

Dr Fitzgerald says it’s been worth all the careful negotiation and preparation.

“It’s more relevant today than ever, given the global change that’s occurring, given global heating and the extinction crisis that we’re facing,” he says.

“Paleontology for me is putting the dead to work and how we do that with dinosaurs is that we remind people about not only the majesty, the extraordinary complexity and diversity, but also fragility of life on Earth.”

Horridus will feature in Triceratops: Fate of the Dinosaurs, a new exhibition opening at Melbourne Museum on Saturday, March 12, 2022.