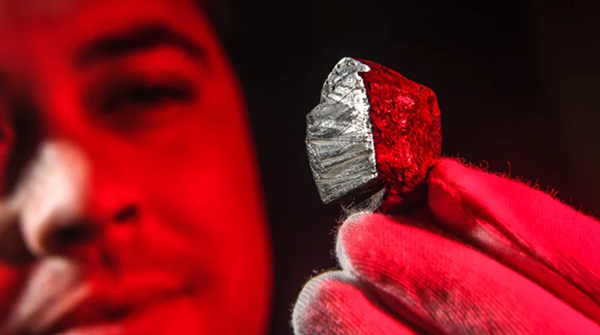 Dr Stuart Mills with the Wedderburn meteorite. Scientists have discovered a new mineral buried inside it, forged in the core of a planet that no longer exists. Credit: Justin McManus.

Liam Mannix, This meteorite came from the core of another planet. Inside it, a new mineral, The Age, 1 September 2019

Scientists have discovered a new mineral, one never before seen in nature, lodged inside a meteorite found near Wedderburn in central Victoria.

They believe the mineral was likely forged in the molten core of an ancient planet long since destroyed.

The meteorite is red and black and deeply scarred from its million-year-plus journey, and certainly looks the part. The mineral it contains has been christened edscottite.

The mineral was found after close examination of the Wedderburn Meteorite, a lemon-sized chunk of metal found just outside Wedderburn in 1951, and now a part of Museums Victoria’s collection.

We have found many meteorites, but a meteorite from the core of another planet is extremely rare.

Over the years several inquisitive scientists from around the world, desperate to study it, have managed to secure slices; only 71 grams of the original 220-gram rock are still held within the museum’s vaults.

A team from CalTech in the US managed to get their hands on a slice in 2018, to see if it contained any rare minerals.

Inside the meteorite, sandwiched between other layers of minerals, the researchers found a thin sliver of a new material. Under a microscope, it resembles tiny white crystals.

The mineral, they discovered, is made of iron and carbon atoms mixed together into a certain pattern. They named it edscottite, after Edward Scott, a pioneering cosmochemist at the University of Hawaii.

“This meteorite had an abundance of carbon in it. And as it slowly cooled down, the iron and carbon came together and formed this mineral,” says Dr Stuart Mills, Museums Victoria’s senior curator of geosciences.

Scientists have come across edscottite before, inside smelters. It is one of the phases iron goes through when it is smelted into steel.

But they have never seen it naturally occurring. And minerals only get a name when you can find them in nature.

Now, about that planet. What happened to it?

“It got blasted apart,” says Geoffrey Bonning, a planetary scientist at the Australian National University.

Our solar system – the Earth, Australia, you and me – started out as dust emitted by long-dead stars.

That dust swirled through space until gravity finally started to pull it together, bit by bit. Those lumps grew larger and larger, first forming grains of sand, then big chunks, then kilometre-wide asteroids.

Eventually those asteroids chunked together to form planets.

“All rocks to some degree are a little bit radioactive,” says Mr Bonning. “So this planet, it starts to melt inside.”

Hot metal would have dripped down into the planet’s core. The heat and pressure generated minerals like edscottite.

And then, at some point, the planet got blasted apart. It was probably hit by another planet or moon, or a huge asteroid, says Mr Bonning. Many planets were created and destroyed in the early days of the solar system.

Rubble from the collision was strewn across the solar system, much of it ending up in the asteroid belt between Mars and Jupiter. The Wedderburn meteorite circled out there for a few million years, before a chance collision sent it racing towards Earth.