You are here: Home » Articles filed under: 'News' » Article: 'Name a nudibranch' 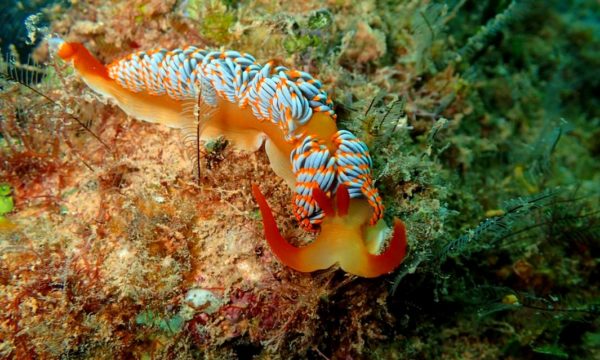 The currently unnamed species of nudibranch discovered by WA scientist Dr Nerida Wilson during a diving expedition off the coast of Dampier, about 1,500km north of Perth, in 2000. Photo: Western Australian Museum.

The Western Australian Museum is running a public competition to name a new species of “flamboyant sea-slug”, part of an order named nudibranch.

The blue and orange creature is up to 8cm long and looks like a cross between a slug and a Pokémon.

It was discovered by WA scientist Dr Nerida Wilson during a diving expedition off the coast of Dampier, about 1,500km north of Perth, in 2000.

Wilson said the nudibranch was “very memorable” and “has an impressive display to scare off predators”, which consists of puffing up its cerata, the orange-tipped blue sausages that line its body, and waggling them at suspected attackers.

The purpose of the cerata is to increase the slug’s surface area and allow it to take in more oxygen. They’re brightly coloured to reflect the toxins in the nudibranch’s diet, which it in turn extrudes through its skin.

Wilson said it had taken 16 years to determine it was a new species of nudibranch, due to the sheer abundance of nudibranchs in Australian waters.

She has handed the task of naming the creature over to the public, running a competition in conjunction with Radio National’s Off Track program to determine the second part of the scientific name, which will begin with the genus Moridilla.