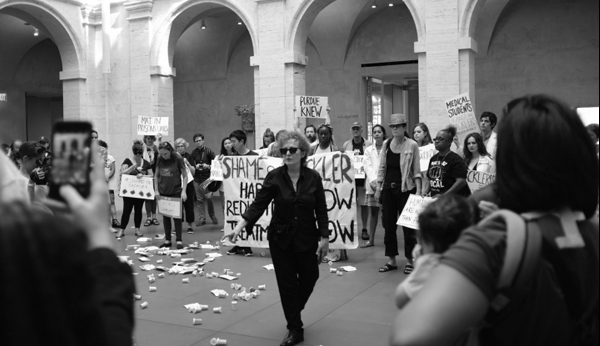 The photographer, along with health activists and Harvard medical students, organized a die-in in the atrium outside the Arthur M. Sackler Museum in Cambridge, MA.

On Friday, July 20, artists, activists, and medical professionals crowded the Harvard Art Museums atrium for a protest and die-in organized by the group P.A.I.N. Sackler. The organization seeks to pressure Purdue Pharmaceuticals, owned by the descendants of Mortimer and Raymond Sackler, manufacturers of popular prescription drug Oxycontin, to take responsibility for their part in the opioid addiction endemic.

P.A.I.N. (Prescription Addiction Intervention Now) was spearheaded by Nan Goldin, the renowned photographer best known for her collection of photographs that became The Ballad of Sexual Dependency. After heroin use during her young adulthood, in 2014 she formed a three-year OxyContin addiction “overnight” after being prescribed the drug following surgery. The artist says she was not properly informed by physicians of the strong addictive quality of the drug. A survey published by the Centers for Disease Control and Prevention and National Vital Statistics System says that opioid overdose kills over 115 people in the United States daily.

The group has been targeting the Sackler family’s philanthropic efforts within art institutions. In a statement via their website, they explain their mission, “[The Sacklers] have washed their blood money through the halls of museums and universities around the world. We demand that the Sacklers and Purdue Pharma use their fortune to fund addiction treatment and education. There is no time to waste.” The Harvard Art Museums consists of three art museums, including the Arthur M. Sackler Museum.

The organization hosted over 70 protesters at a die-in demonstration last Friday. The protest operated with support from organizations like VOCAL NY, the Center for Popular Democracy, and the Harm Reduction Coalition. The group marched from Harvard Square to the atrium of the Harvard Art Museums building, which hosts the Fogg Museum, Busch-Reisinger Museum, and Arthur M. Sackler Museum. Participants threw Oxycontin and Narcan (a narcotics overdose prescription medication) containers across the floor of the atrium, chanting protests like “Sacklers lie! People die! Fund harm reduction now!” Hyperallergic reached out to the Harvard Art Museums and a representative of the institution declined to comment.

Hyperallergic spoke with Andrew Goldstein, a public hospital primary care physician and health activist who was present at the protest. The medical practitioner says of the protest’s significance, “ … with artists involved, the visuals were impressive, including attire (white coats and scrubs), signs, pill bottles, and the immense and beautiful space (being in the Sackler-funded Harvard museum itself). Lastly, the message is spot on and central to this action: it is immoral to market medicines in ways that are dangerous and for profiteering, that Harvard and other wealthy institutions are complicit by accepting this money from the Sacklers, and that we will hold them accountable.”

P.A.I.N. calls for the Sacklers to stop funding museums, and divert these funds to help reverse and heal the opioid addiction epidemic. They compel the mega-company to redirect at least half of their profits to treatment facilities (rehabilitation centers, harm reduction, relapse prevention); educational programs for schools, medical professionals, families, and drug users; and re-education across the boards to inform physicians of the hazards of over-prescription.