You are here: Home » Articles filed under: 'News' » Article: 'Nation of Curious Minds'

On 29 July 2014, the New Zealand Government launched a new plan to encourage and enable better engagement with science and technology across New Zealand society.

The plan, A Nation of Curious Minds – He Whenua Hihiri i te Mahara, recognises the important role scientific knowledge and innovation play in our lives and in creating and defining New Zealand’s future, economically, socially and environmentally.

A Nation of Curious Minds sets out the following goals for the next ten years:

Three key areas of action and an integrating action have been identified for the first three years of the plan.

The action areas are:

The integrating action is a web-based participatory science platform to engage students, communities and scientists in participatory research.

The action areas will not operate in isolation and a number of the initiatives mentioned in the plan will apply across the three action areas.

About science in society

The Science in Society project has its roots with the National Science Challenges Panel.  The Panel’s 2013 report identified a special leadership challenge for the Government in improving understanding of science and technology through the education system and by promoting public engagement in science and technology.  The Panel saw the leadership challenge as the most important of the challenges and the one of highest priority.

This is a joint project between the Ministry of Business, Innovation and Employment and the Ministry of Education, with advice from the Office of the Prime Minister’s Chief Science Adviser.  A range of government agencies and stakeholders in the education and science sectors, along with business, museum and Māori stakeholders provided feedback on a draft of A Nation of Curious Minds. It draws some of its ideas from activities already underway at the local and national level that are encouraging and enabling better engagement with science and technology across New Zealand society. 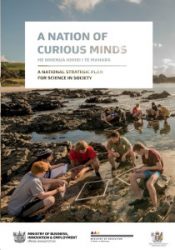 Report cover.
Positions Vacant » View All
» Exhibition Experience Developer – Te Papa
» Operations & Science Centre Mgr – Otago Museum
Latest News » View All
MA Museums Change Lives Awards
2021 Shortlist announced Read more.
Tattooing as a cultural phenomenon & art
form – historic & current challenges Read more.
Oriel College’s retain & explain plaque for
Cecil Rhodes statue – what’s balance? Read more.
City of London to retain & explain statues
- Guildhall’s slave trader policy reversal Read more.
What to do if you find fossils or artefacts
A history worth protecting Read more.
Top +
Council of Australasian Museum Directors, c/o Ms Daryl Karp, Museum of Australian Democracy at Old Parliament House PO Box 3934 Manuka, Australian Capital Territory 2603 Australia, © CAMD 2021
Copyright: All information and resources provided on this website remain the copyright of the Council of Australasian Museum Directors. Permission is granted for viewing and downloading for personal and not for profit purposes. Those wishing to reproduce any materials for commercial, educational or other uses are requested to contact us.
Disclaimer: The content of this website is provided for information purposes only and is not intended as a substitute for professional advice. No claim is made as to the accuracy or authenticity of the content of the website. The Council of Australasian Museum Directors does not accept any liability to any person for the information or advice (or the use of such information or advice) which is provided on this website. The information on our website is provided on the basis that all persons accessing the site undertake responsibility for assessing the relevance and accuracy of its content. No responsibility is taken for any information or services which may appear on any linked web sites. Hostgator.
.