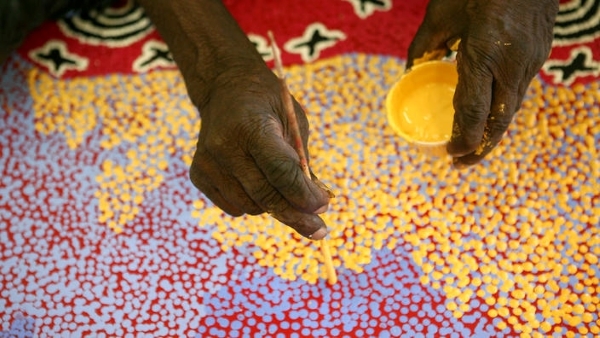 Brooke Fryer, It’s ‘race on’ to be the first to have the ‘national’ Aboriginal art gallery, NITV, 17 April 2019

South Australia and the Northern Territory both have plans to build a national Indigenous art gallery, sparking debate over whether there can be two.

The Northern Territory Government has been planning to build the first national Aboriginal gallery in the town of Alice Springs, despite the absence of any kind of commitment or support in terms of federal funding.

The NT proposal has been in the conceptualisation process for two over years and will come as part of the NT’s Arts Trail in a bid to boost tourism.

The preferred site for the gallery is the old Anzac Hill High School, in the northern suburbs of Alice Springs, however, there have been local community concerns that their main oval located in front of the school could be lost in the development.

“You don’t have two national organisations or venues of any kind generally, so I guess it’s ‘race on’ really,” he said.

Mr Melky has been working in partnership with community Elders and said each location the territory government put forward to house the future gallery was knocked back by the community, who say the government is having a hard time understanding cultural boundaries.

“Where [the government] went wrong is they were speaking to some of the members of the custodian family groups, not all [of them]. They spoke to one individual of the custodian group,” he said.

The NT government has committed $50 million towards the gallery development despite being broke to the tune of over $3 billion.

The government is hoping the Coalition will contribute another $100 million, said the NT Minister for Tourism, Sport and Culture Lauren Moss.

“We have had numerous conversations with the Federal Government and others across the country about funding for this important project that will deliver significant economic, cultural and social benefit to the town,” she said.

Central Australia is the ‘rightful home’

The minister said Alice Springs is the “rightful home” for the gallery and the NT government was “well-advanced” in its planning for the development.

“Central Australia is the home of many of our most significant Aboriginal art movements, from the world-renowned Hermannsburg watercolours to the art of Papunya to evocative Western Desert art,” said Ms Moss 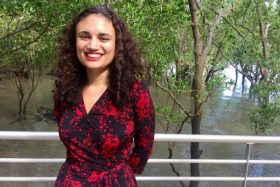 Mr Melky reiterated that the central Australian city was the ideal location for a national Indigenous gallery.

“Alice Springs is very different from South Australia when it comes to cultural and spiritual location… it is the heart of Australia, it is the meeting place of many cultures,” he said.

“South Australia would never have that … That level of cultural positioning.”

The Mayor of Alice Springs, Damien Ryan, said he had been in contact with the SA premier and was of the understanding that only a cultural gallery would be built in Adelaide, not a national gallery.

“I have spoken with the Premier, who clearly sees the national Aboriginal art gallery should be built in Alice Springs and the Adelaide complex will be like a hub,” he said.

In March, the SA Premier Steven Marshall announced the state had received $85 million from the Coalition to build the National Gallery for Aboriginal Art and Cultures in Adelaide.

The funding comes as part of a $129 million cultural boost to enhance Adelaide’s cultural, art and food economy. The boost was announced by Minister for Cities and Urban Infrastructure, Alan Tudge, in mid-March.

The Premier started the consultation process in February and said the gallery would be a unique asset to the entire country.

“[It] will be the first of its kind in Australia and will allow us to properly recognise and celebrate the oldest living cultural history, which will attract both national and international attention,” he said.

The gallery was a campaign promise by the Marshall government during the state’s election last year.

Construction is expected to commence in two years at the location of the old Royal Adelaide Hospital site, and has approval from the Aboriginal community who are excited about the future of the gallery.

Mr Stokes told NITV News two galleries could co-exist in Australia and federal funding should not be allowed to become an issue as both venues would attract tourism dollars.

Despite the early stages of the project, the state government is doing everything right, said Mr Stokes.

“It has been a great process, they have dealt with it really well… [it] has been really good.”