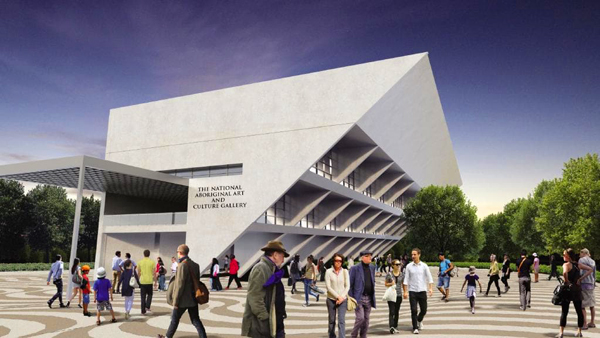 An artist’s impression of the National Aboriginal Art and Culture Centre proposed for Adelaide by the Liberal opposition in South Australia.

“It is well recognised that a National Centre for Aboriginal Arts and Culture is long overdue. The absence of a national gallery for Aboriginal Australia’s cultural and artistic heritage is a significant omission by Australian governments,” said South Australian Liberal Party leader Steven Marshall last week during the current State election campaign.

Using the momentum of the opening of the Adelaide Festival and the Adelaide Biennial of Australian Art, SA Liberals announced that they would be pushing for a National Aboriginal Arts and Culture Centre should they win the March election. The Liberal Party’s rather belated plan is for the old Royal Adelaide Hospital site, and also includes an international school of culinary excellence.

Opposition Leader Steven Marshall said the gallery would be of international significance and would attract visitors to Adelaide. The proposed gallery would build on assets already established in Adelaide, including Tandanya National Aboriginal Cultural Institute and the iconic biennial Festival of Indigenous Art, Tarnanthi, led by the Art Gallery of South Australia. South Australia has the world’s most significant collection of Aboriginal culture, held by the AGSA and the South Australian Museum, but current space allows only five per cent of it to be seen by the public.

Marshall’s announcement has come rather late in the game, with the AGSA under Director Nick Mitzevich, well on track in its plans for an Adelaide Contemporary art gallery on the same site. An international competition is underway for its design.

And this fine suggestion comes only after Sydney (at Barangaroo), Western Australia and the NT had all thrown up the idea of a National Aboriginal Art Gallery. The NT has actually gone so far as establish an advisory committee for an ‘Iconic’ Art Gallery as well as the notion of a separate Cultural Institution in Alice Springs, and even picked two equally unpopular sites for their Gallery. Which makes it unsurprising that the NT’s highly communicative Labor government should come out fighting:

“The rightful home for a National Aboriginal Art Gallery is Alice Springs, on the doorstep of Namatjira country, Minister for Tourism and Culture, Lauren Moss said following comments that it should be based in Adelaide.

“We are well down the track of building a nationally significant Aboriginal art gallery in Alice Springs. We have undertaken initial consultation with the community and key stakeholders, planning is underway and we are looking forward to making an announcement soon about where in Alice it will be located as well as the next steps in the process with construction to start in 2020”, Ms Moss said.

“Central Australia is the birthplace of many of our most significant Aboriginal art movements, from the world-renowned Hermannsburg water colours to the art of the Western Desert including the influential Papunya Tula art movement. The Red Centre is the beating heart of Aboriginal art in Australia and the rightful home for our National Aboriginal Art Gallery.

“We already have an initial $50 million on the table for this important project as part of a $100 million investment into building a unique and culturally significant Arts Trail the length and breadth of the Northern Territory”.

“We currently work with the SA Government to unlock economic opportunities throughout Central Australia”, Ms Moss continued; “through tourism, culture and transport investment. We welcome our neighbouring jurisdictions investing in their own cultural assets, because it will provide enormous mutual benefits, through tourism, economic stimulus and cultural exchange.

“However, there can be only one National Aboriginal Art Gallery and we are building it in Alice Springs. It will become a drawcard for the town, attracting thousands of people each year from overseas and interstate, cementing Alice Springs’s reputation as the Inland Capital of Australia”.

As ever, though, the feisty Ms Moss seems to have lost sight of the more important part of the deal….the ‘Iconic’ National Aboriginal Cultural Institution which should background the extraordinarily complex traditional cultures of Indigenous Australia and set up an understanding of both its historic and contemporary art.

Maybe that will end up in Adelaide!