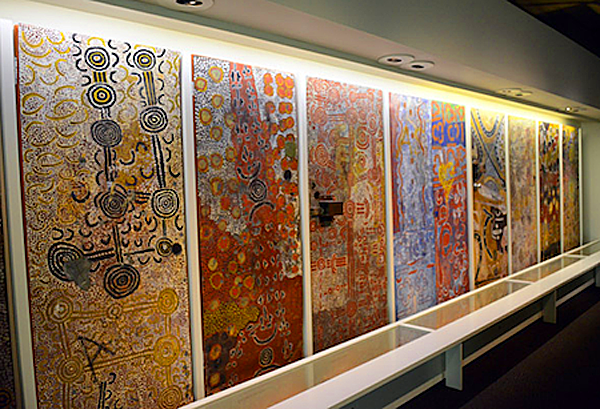 The Yuendumu Doors in the South Australian Museum.

Clinching the national Indigenous art gallery for Adelaide is a higher priority for the new Liberal Premier, when compared to his Labor predecessor, and South Australia already has “the largest and most representative, comprehensive” Aboriginal art collection on display in the world.

So says the Senior Curator Anthropology of the South Australian Museum, Philip Jones, in Alice Springs yesterday to open the exhibition of the Yuendumu Doors Etching Suite at the Residency.

The views of Dr Jones put into context the need to sort out urgently the troubled preparations for the gallery to be in Alice Springs.

In an exclusive interview with the Alice Springs News Online Dr Jones says: “There are pressures to use what is regarded as the foremost collection in the world of Aboriginal material in Australia, to showcase that in Adelaide, and to use it as a means of drawing people in for the tourist dollar in Adelaide.”

This would be “building on the critical mass that’s there. From the Adelaide perspective it’s the logical place for such a gallery to be.

“If you’re taking the Indigenous perspective, the heart of the Aboriginal art movement as it’s perceived in Australia and by the world is certainly Central Australia.

“How do you reconcile that? Is there room for two institutions of that kind?

“Should it be founded in historical material? Then you would want it to be where the collections are, which is South Australia,” says Dr Jones.

“Or is it founded in the post-1970s movement, Western Desert movement, and in the case of the [northern] NT, the bark painting movement, in which case the Territory is the place.

“I guess it’s who makes the loudest noise at the right time, and who has more money.”

What impact has the change to a Liberal government in March made to the prospects of a gallery in South Australia?

“It’s hard to know. It’s all shadows and mirrors. Who’s actually meaning what they said before the election and now after the election.”

Who is pushing it since the election in March?

Says Dr Jones  “The Premier at the moment is pushing it. He suggests he is passionate about this idea.”

More so than the previous Premier? Mr Jones says yes.

“The previous Premier was actually committing himself more to a contemporary art museum which would probably include Aboriginal material, whereas Steven Marshall is suggesting that his priority is the national Indigenous art collection.

“At the South Australian Museum we already have the largest and most representative, comprehensive collection on display in the world.

“It is founded mainly in what I call the classical period, leading up to and including the European arrival, I suppose, with some key exceptions [including] the Yuendumu Doors that take us through into the contemporary movement.

“Our strengths are pre the Second World War, certainly pre the 1960s.

“Post 1960s we have some really important works which represent perhaps the origins of the Western Desert movement and the early Bark Paintings Movement.

“Mountford’s collection from 1948 in Arnhemland, for example, are absolutely crucial for understanding contemporary Aboriginal art in Arnhemland today.

“If you’re looking at cultures which had been overwhelmed and blown sideways by European arrival then we have incredible collections [at the South Australian Museum] relating to southern Australia, even eastern Australia as well.

“If you’re telling a story about national Aboriginal art then certainly you shouldn’t be concentrating on the Western Desert and the bark paintings because that’s – sort of – the hegemony of the dot and quite recent.

“Eastern Australian, or south-eastern or even Tasmanian people would be saying, yet again they are privileging this movement which is the one that survived and has grown and prospered in central and northern Australia.

“But what about our heritage, the geometric based designs of south-eastern Australia which are intricate and extraordinary, and have been more or less forgotten?”

Meanwhile, the public continues to be left in the dark about exactly what kind of institution is envisaged with the proposed gallery in Alice Springs. Do the authorities leading the charge to locate and fund it even know? Certainly it has never been a clearly enunciated and there has been no education of the community about what the possibilities are.

The one thing we do know is that the Alice Springs gallery is having to answer to many local agendas on top of the complicated task of setting up a national cultural institution.