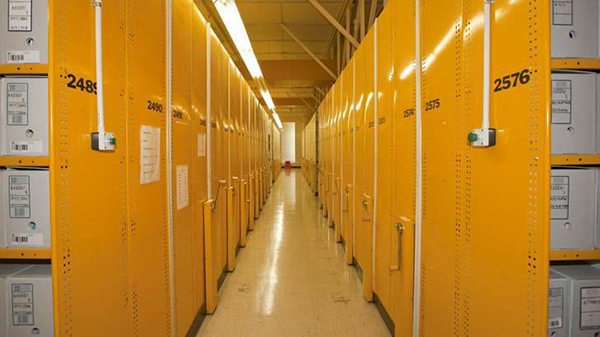 Inside the National Archives, which may be at risk without dramatic intervention. Picture: Supplied.

A panel hand-picked by the government has warned the National Archives may not survive unless its funding is nearly doubled and an extra 200 staff are hired.

The plea was handed to a review examining major problems with the institution, including concerns by Australia’s top historians that sustained funding cuts had led to extraordinary processing delays and abandoned research projects.

The chair of the National Archives of Australia Advisory Council, former Queensland Liberal Party leader Denver Beanland, said the institution was in jeopardy after being overlooked by the federal government for years.

“The National Archives is now in an unsustainable budgetary and resource position and is unable to properly meet its legislated requirements,” Dr Beanland wrote in the submission.
The archives has lost roughly 10 percent of its budget each year since 2014, and has shed 74 jobs since 2012.

Dr Beanland wrote that essential plans to digitise hundreds of thousands of items close to ruin had been delayed and warned there were cybersecurity risks to maintaining records in outdated systems.

“The digital archival records of the Commonwealth are currently fragmented across hundreds of separate systems and government entities exposed to compromise, obsolescence or loss,” he warned.

The chair called for an extra 193 full-time equivalent staff on top of the existing 343 and an extra $65 million per year over the forward estimates to eventually reach a near-doubling of its annual budget to $153 million by 2026.

The council also noted the archives is the only national collecting institution without a purpose-built home in Canberra and asked for $5 million to explore a new national archives building on the shore of Lake Burley Griffin.