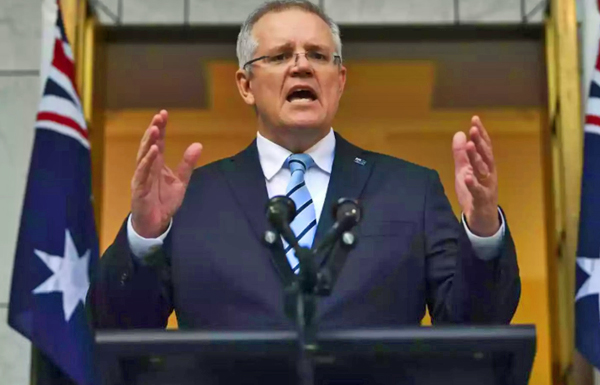 The prime minister, Scott Morrison, will commit to a new museum to raise awareness and understanding of the impacts of child sexual abuse. Photograph: Lukas Coch/AAP.

Scott Morrison will commit to a new museum to raise awareness and understanding of the impacts of child sexual abuse as the centrepiece of what will be an emotional national apology to the survivors of institutional abuse in federal parliament on Monday.

The prime minister will commit in Monday’s speech to a museum that will be a place of remembrance and reflection, as well as a place cataloguing the events leading up to the royal commission and the national apology, with the scope of the project to be worked out in consultation with survivors.

Morrison will also commit to reporting to parliament each year for the next five years on the progress being made implementing the recommendations of the royal commission.

He will also establish a national centre of excellence in partnership with states and territories to raise awareness and understanding of the impacts of child sexual abuse, and support the services being offered to victims.

Cheryl Edwardes, the chair of the reference group for the apology, a former Western Australian attorney general and the chair of the Independent Advisory Council on Redress, told Guardian Australia that Monday would be “a very important and emotional day for survivors, and for many of their families and friends”.

Edwardes met on Sunday with survivors as they arrived in Canberra for Monday’s event, and she said people were “very appreciative of the opportunity of being here to listen to the prime minister deliver the apology”.

She said the museum had emerged from the consultations around the country. “One of the key things was survivors wanted a memorial – a place to go and sit and reflect – and a place that will put these tragic circumstances in a place so they could never be forgotten, so that children would not be put in a position in the future where their accounts of abuse would not be believed.”

The government has thus far accepted 104 of the 122 recommendations addressed to the commonwealth in the wake of the royal commission. A spokesman for the prime minister said the other 18 were being “closely examined, in consultation with states and territories”.

More than 80 of the recommendations of the royal commission related to a redress scheme for survivors, that all the states and territories have now signed on to along with the Catholic, Anglican and Uniting churches, although the scheme is not without criticism.

The former prime minister Malcolm Turnbull pledged to deliver the national apology in June, and set the date for 22 October to coincide with national children’s week.

Monday’s apology comes as the high-profile independent Kerryn Phelps remains on track to claim Turnbull’s former seat of Wentworth from the Liberals after the byelection delivered a massive swing against the government on Saturday night, an upset pushing the Coalition into minority government.

The count in Wentworth proved something of a rollercoaster ride on Sunday, with the Liberal candidate, Dave Sharma, initially closing the gap between the two candidates to 884 votes, before Phelps extended her lead again to over 1,600 after adjustments were made in the count at a couple of booths.

With parliament set to resume for the week, there is also a prospect of progress on Nauru, with Labor cautiously opening the door on Sunday to negotiating with the government over the resettlement of people on Nauru.

Phelps declared on Sunday that dealing with children on Nauru needed to be an immediate priority and the manager of opposition business, Tony Burke, told the ABC he did not want a repeat of the situation a few years ago where a parliamentary deadlock over transferring asylum seekers to Malaysia scuttled a practical outcome.

Morrison has said New Zealand is an option if Labor supports government legislation preventing resettled people from ever returning to Australia. Labor last week rebuffed that condition, although Burke’s comments on Sunday suggest the opposition is now open to discussion.

Phelps has signalled she would not lightly support a no-confidence motion in the government, and Labor on Sunday indicated, with the apology the focal point of Monday, there were no immediate plans afoot to test Morrison’s control of the House.