Each committee member brings considerable professional experience and expertise in their respective field to the role. Together they will work to maintain a robust system for the protection of Australia’s movable cultural heritage.

My department will work with the committee to streamline its operations so it can take a more strategic focus on the critical national and international issues that impact the sector.

The committee’s recommendations on the export and protection of Australia’s movable cultural heritage will continue to be informed by the advice of registered expert examiners.

For the past 26 years, expert examiners have assessed the cultural significance of thousands of objects in a voluntary capacity. I am also pleased to announce a new payment system for expert examiners in recognition of the critical role they play in the protection of Australian movable cultural heritage.

Dr Greene is highly regarded in the cultural heritage and collections sector internationally.

In 2002, he was appointed as CEO of Museums Victoria, the largest museum organisation in Australia, with a collection of nearly 17 million items.

Dr Greene has held senior positions in a number of key cultural heritage organisations, including as Chair and member of the Council of Australasian Museum Directors, the Council of the National Collections Advisory Forum, and the Industry Advisory Panel of the Centre for Cultural Materials.

In 1983, Dr Greene was appointed the inaugural Director of the Museum of Science and Industry in Manchester, England. The ambitious project resulted in the creation of the largest museum of industry housed in historic industrial buildings in the world. During this period he was made an Officer of the Order of the British Empire (OBE) and was Chairman of the Heritage Lottery Fund Expert Panel on Museums Libraries and Archives.

Professor Chappell is an Adjunct Professor in the Faculty of Law at the University of Sydney, and one of Australia’s pre-eminent experts in the field of illicit trafficking in cultural property. A former Director of the Australian Institute of Criminology, he has published widely on art crime and the illicit trade in cultural property. In 2013, Professor Chappell was awarded the Eleanor and Anthony Vallombroso Award for Art Crime Scholarship by the Association for Research into Crimes against Art.

Mr Eisenberg is a well-respected and longstanding cultural heritage mentor in regional Australia. After 20 years as Director of the New England Regional Art Museum in Armidale, Mr Eisenberg joined the Maitland Regional Art Gallery in 2004 as Cultural Director overseeing the planning and redevelopment of the new $8.6 million heritage building. In 1996 Mr Eisenberg was awarded the Medal of the Order of Australia for services to the visual arts; he has also received two National Trust Heritage Awards.

Dr Were is the senior lecturer and convenor of the Museum Studies postgraduate programme at the University of Queensland. Dr Were led the Mobile Museum project to produce 3D digital scans of objects from the UQ Anthropology Museum and the Queensland Museum collection selected by the community of origin in the Pacific. In 2012, he was awarded the University of Queensland Foundation Research Excellence Award for his research into digital heritage and cultural revitalization in Melanesia. 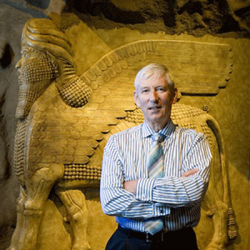 Patrick Greene, CEO, Museum Victoria. Source: Museum Victoria
Positions Vacant » View All
» Team Leader, First Peoples Art & Culture – TMAG
» Booking Services & Rostering Officer – SLM
Latest News » View All
AWM Council elects Kim Beazley AC as new Chair
bringing 'impeccable record of public service' Read more.
Dion Pieta director appt to grow Te Ao Māori
perspectives & business at Univ of Auckland Read more.
Apollo awards 2022 shortlists announced
- awards ceremony in London 6-December Read more.
Egyptian archaeologists discover new Queen
tomb of a previously unknown queen Read more.
Ötzi Iceman narrative revisited & rewritten
- spring death & ice movement? Read more.
Top +
Council of Australasian Museum Directors c/o Mr Brian Oldman, South Australian Museum PO Box 234 Adelaide, South Australia 5001 Australia, © CAMD 2022
Copyright: All information and resources provided on this website remain the copyright of the Council of Australasian Museum Directors. Permission is granted for viewing and downloading for personal and not for profit purposes. Those wishing to reproduce any materials for commercial, educational or other uses are requested to contact us.
Disclaimer: The content of this website is provided for information purposes only and is not intended as a substitute for professional advice. No claim is made as to the accuracy or authenticity of the content of the website. The Council of Australasian Museum Directors does not accept any liability to any person for the information or advice (or the use of such information or advice) which is provided on this website. The information on our website is provided on the basis that all persons accessing the site undertake responsibility for assessing the relevance and accuracy of its content. No responsibility is taken for any information or services which may appear on any linked web sites. Hostgator.
.