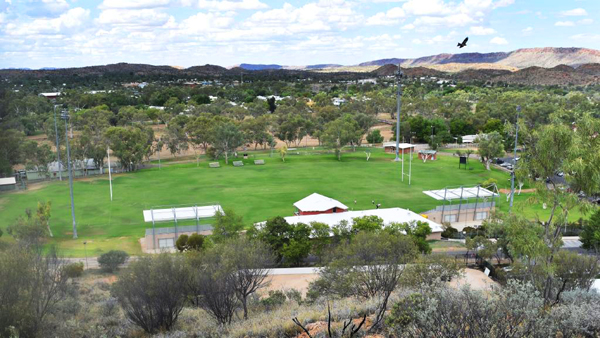 Anzac Oval in Alice Springs, where it is proposed the National indigenous Art Gallery will be built. Picture: Andrea Johnston.

It was announced earlier this year the Gunner government would be building the multimillion-dollar iconic gallery at the Anzac Oval precinct, right in the centre of town.

The outcry came immediately and from many corners — Aboriginal stakeholders, residents who didn’t want to lose access to the historic precinct and, particularly vocal, independent Araluen MLA Robyn Lambley.

Opposition even came from within the government’s ranks with protests from Scott McConnell and the Gallery steering committee set up by Labor.

Also strongly opposed were the two footy codes — league and union — who have made their home at the precinct.

Their voices were, however quietened recently when the government promised them a new headquarters with two fields, a grandstand, lighting, catering and hospitality facilities, office space, and corporate boxes.

“It’s a sensational opportunity for us,” they said.

One of the main issues with the Anzac Oval site has been the perceived lack of consultation, with Ms Lambley saying “the only community consultation that the Government has done, at all, for the national indigenous art gallery has been an online survey they conducted for four weeks”.

Local business owners have, for the most part, thrown tacit support behind the site, though some will not go public with their views, fearing a backlash from customers.

Alice Springs Chamber of Commerce chief executive Dave Batic said “the Chamber’s view is that it is very supportive of a gallery being within the CBD.

The main reason is the secondary flow-on effects to local businesses on the periphery of an iconic gallery.

The Chamber’s view is that (the gallery) within the CBD would benefit more businesses.”

Last month Member for Braitling Dale Wakefield took over from the Tourism Minister as government mouthpiece for the Gallery.

She has embarked upon a consultation and communication campaign which she hopes will sway the community over to the government’s side.