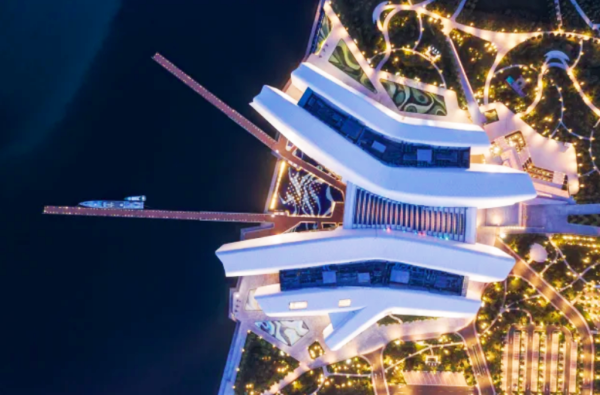 “It’s really a museum on steroids when it comes to the type of museum compared with an Australian version,” the veteran Australian architect tells The Australian Financial Review.

But rather than its size, the museum in Tianjin, the port city closest to China’s capital Beijing, is significant for what it says about the story China is telling its own people and the rest of the world about the country’s seafaring history.

At a time when China’s ambitions in the South China Sea are causing tensions with neighbouring countries, and when President Xi Jinping is promoting the Maritime Silk Road as a trade and development project, the significance of the project was great, Cox says.

“Because of the size and scale of the museum it was considered a very important statement that yes, China has been a maritime power and maintains its position as a maritime power,” he says.

“I think unlike other countries that haven’t asserted themselves in that demonstrative way – even the Japanese haven’t done that – the Chinese felt it necessary to make a statement that yes, it has always been a maritime power.”

The museum that opened to visitors last year but has yet to open formally, comprises four wings that reach out into Tianjin’s Bohai Bay from the waterfront. It interprets China’s maritime history in relation to events in Europe, America and the rest of Asia.

It was a long project – Cox was awarded the contract in 2013 after winning international design competition for the museum. It was built by China Construction, the country’s largest builder.

“They were part keen to show as much as possible China’s maritime trade correlation to European and Middle Eastern trade, rather than be seen as some kind of isolated maritime history,” says Michael Rayner, a former Cox partner involved in the original competition.

Rather than a monolithic building – as per the style of many museums commissioned in China this century, the design was for finger-like halls, two of them cantilevering out over water of the bay and connected by bridges to adjacent halls that allowed visitors to observe China’s history with the same period of history in other parts of the world.

The Australian firm worked with a large local firm, TADI, the Tianjin Architecture and Design Institute. Arup was the engineer.

Selling the original design idea took some work. Rayner says he likened the concept of the separate pavilions – on advice from a Chinese colleague – to the Chinese notion of leaping carp, an auspicious symbol, but was surprised to get a muted reaction from his design jury audience.

“I got a rather cold reception to this idea and I was thinking – I can’t understand why I’m getting a negative response to this thought,” he recalls.

Then he was told why.

“The reason for the concern was that the cantilevers were so shallow in the judges’ mind they thought we had put the jumping carp in but chopped their heads off!” he laughs.

The pavilions didn’t get the full extra length, but they were still lengthened, Meng says.

“It was reduced, but is still quite substantial,” she says. “The resulting cantilever is 41.9 metres at the longest.”