The National Museum of Australia celebrates its 12th birthday at Acton Peninsula on Monday, 11 March 2013.  Join the museum for a car rally and free entry to the NMA’s newest exhibition, Glorious Days: Australia 1913.

One- and two-cylinder vehicle rally

Veteran and Vintage Car Club of the ACT vehicles on show at the National Museum of Australia. Photo: Jason McCarthy.

To mark the National Museum’s birthday and the Centenary of Canberra, the Museum welcomes a national vehicle rally hosted by the Veteran and Vintage Car Club of the Australian Capital Territory.

The rally includes 60 early petrol, steam and electric cars, of the type that would have graced Australian roads in 1913.

Step back in time to Glorious Days: Australia 1913. Immerse yourself in a time of tremendous optimism, when Australians took pride in their distinctive culture, high standard of living and sporting prowess. Glorious Days features beautiful artworks, costume, music and newsreel footage from Australia a century ago.

Temporary Exhibition Gallery
Free on this day only 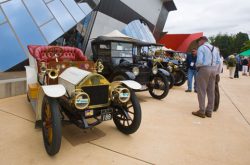 Veteran and Vintage Car Club of the ACT vehicles on show at the National Museum of Australia. Photo: Jason McCarthy.
Positions Vacant » View All
» Team Leader, First Peoples Art & Culture – TMAG
» Booking Services & Rostering Officer – SLM
Latest News » View All
AWM Council elects Kim Beazley AC as new Chair
bringing 'impeccable record of public service' Read more.
Dion Pieta director appt to grow Te Ao Māori
perspectives & business at Univ of Auckland Read more.
Apollo awards 2022 shortlists announced
- awards ceremony in London 6-December Read more.
Egyptian archaeologists discover new Queen
tomb of a previously unknown queen Read more.
Ötzi Iceman narrative revisited & rewritten
- spring death & ice movement? Read more.
Top +
Council of Australasian Museum Directors c/o Mr Brian Oldman, South Australian Museum PO Box 234 Adelaide, South Australia 5001 Australia, © CAMD 2022
Copyright: All information and resources provided on this website remain the copyright of the Council of Australasian Museum Directors. Permission is granted for viewing and downloading for personal and not for profit purposes. Those wishing to reproduce any materials for commercial, educational or other uses are requested to contact us.
Disclaimer: The content of this website is provided for information purposes only and is not intended as a substitute for professional advice. No claim is made as to the accuracy or authenticity of the content of the website. The Council of Australasian Museum Directors does not accept any liability to any person for the information or advice (or the use of such information or advice) which is provided on this website. The information on our website is provided on the basis that all persons accessing the site undertake responsibility for assessing the relevance and accuracy of its content. No responsibility is taken for any information or services which may appear on any linked web sites. Hostgator.
.