Kiwis are encouraged to get involved with a new TVNZ show hosted by Te Karere presenter Scotty Morrison and his wife, radio personality Stacey Morrison. 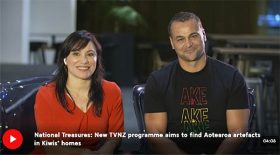 National Treasures encourages New Zealanders to explore within their own homes and find hidden riches from their pasts.

If you do happen to have an historical treasure squirreled away in your house, you can submit it along with any personal stories you may have about it.

Stacey says they want to tell the last 100 years of New Zealand’s history in 100 items.

“A treasure is anything that we treasure ourselves – it doesn’t have to mean a lot of money, it’s the story that we unlock,” she told TVNZ1’s Seven Sharp.

Some examples include a bus ticket on the day of the Christchurch earthquakes or a ticket to a Bob Marley concert.

“All of those things can tell stories and that’s what we want to hear,” she says.

“We want things that are different, that are weird, that are controversial, all of those things.”

Now’s a great time to get searching, with Kiwis stuck at home during the Covid-19 lockdowns, the Morrisons says.

For the show, the Morrisons will head around the country on a roadshow talking to Kiwis about the stories behind their heirlooms.

At the end, the items will be displayed at Te Papa museum in Wellington.

“We want to celebrate New Zealand’s nationhood… and whatever we treasure and the stories these items hold,” Stacey says.

People can contribute photos and their stories of their items on the National Treasures website for a chance to be featured.

The series will air on TVNZ1 next year.