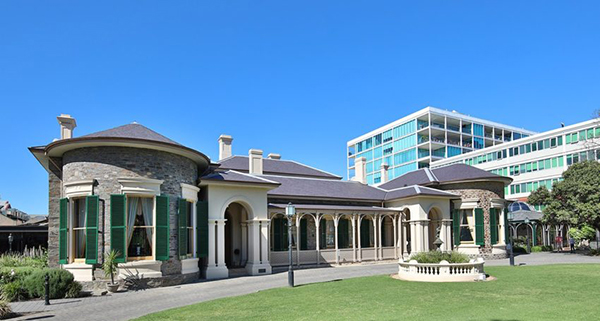 UPDATED: South Australia’s National Trust is “stunned” by a State Government decision to “evict” it from historic Ayers House with a month’s notice, shortly before announcing the property was getting a $6m upgrade and would become the new home of the government-funded History Trust.

National Trust SA CEO Dr Darren Peacock told InDaily that the not-for-profit organisation learned of its “eviction notice” yesterday, just hours before Environment Minister David Speirs announced that the History Trust would move into Ayers House from its existing base at the Torrens Parade Ground.

The move will coincide with a $6.6 million government-funded makeover of the heritage-listed manor, which was built in 1846.

The National Trust has been the caretaker of Ayers House since 1972, after the building was transformed from a nurses’ quarters into a public museum, restaurant, and function centre.

The Government has given the National Trust, which operates the museum, 31 days to pack up what Peacock said were “thousands and thousands” of pieces before the History Trust of SA moves into Ayers House in mid-2022.

“It’s quite extraordinary that the National Trust would be given a 30-day eviction notice after 50 years of dedicated service to the people of South Australia as (former Premier) Don Dunstan asked us to do in 1972.

“We’ve been doing that faithfully since then with no government funding and now the Minister seems to have decided to kick us out.”

Speirs told InDaily that the Government was not evicting the National Trust, rather its one-month reoccurring lease had come to an end.

He said he made the Trust aware about six months ago that the Government “wanted to look at the future of Ayers House”.

He said two months ago, he “made it clear” that he would not renew the lease for another month.

The Minister said the Trust would be given “several months” to vacate Ayers House, despite the termination of lease letter citing only 31 days.

“The idea that this is some sort of bolt from the blue is really not the case,” he said.

In a letter to National Trust SA president Deborah Morgan yesterday, seen by InDaily, Speirs wrote that he had asked his department to “formalise the matter of the National Trust’s departure from Ayers House to ensure that you have certainty and clarity going forward”.

“I remain committed to supporting the National Trust to ensure a smooth transition from Ayers House and I encourage you to continue to have a proactive dialogue with government,” he wrote.

“I believe we can do some great things together at various heritage sites across the state.”

But in her reply to Speirs, Morgan wrote that the notice came as a “great shock to our organisation after more than 50 years at Ayers House”.

She wrote that the notice did not reflect her understanding of the government’s intention to keep Ayers House in the stewardship of the National Trust.

This sounds to me like the Minister’s prioritising a government History Trust, which is of course never going to publicly criticise them

Prior to the 2018 state election, the Liberal Party promised to provide $500,000 to the National Trust to develop and implement a master plan for the building.

“Your letter represents a significant shift and is most concerning to us,” Morgan wrote.

“We are most disappointed that the Marshall Government has decided to renege on its commitments made to the National Trust prior to the last election in respect of the future of Ayers House.” 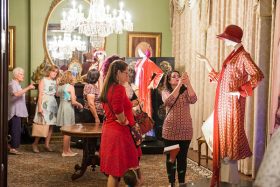 The National Trust has in the past run events at Ayers House, including the Miss Fisher Murder Mysteries exhibition. Photo: Supplied.

Morgan wrote that the Ayers House Museum welcomed “hundreds of thousands of local, interstate and international visitors” and cost the Trust in the order of $150,000 each year to run.

“(It’s) a cost we have borne on behalf of the government in service to the people of South Australia as per the original agreement struck with Premier Dunstan,” she wrote.

She added that fully vacating Ayers House would be an “enormous, complex and expensive operation” for the Trust that would require moving “thousands of items, fixtures and furnishings, many of them delicate and not readily removed”.

“The cost of such an exercise would be very significant and obviously would require a huge amount of planning to undertake.”

The National Trust has called on the Government to backtrack on its decision, but Speirs told ABC Radio Adelaide this morning that the Government “simply have a different vision for that (Ayers House) site – we want it to become home to the History Trust”.

“The National Trust have had that building for 50 years, I’m quite sure that many of your listeners would be surprised to have even known there was a museum there,” he said.

“$6.6 million in investment is something I would have thought would have been celebrated … it’s great news for heritage in this state.”

Speirs said after the Liberal Party formed government “it became apparent that a much larger body of restoration work was needed” to Ayers House, beyond the $500,000 the party originally promised.

He said the National Trust was given the $500,000 in funding as originally promised and refuted claims that the Government had broken an election promise.

“Rather than breaking that election promise I sat down with the National Trust and said, ‘would you like to spend this money on other buildings, you might be able to stretch the money further’ and they agreed to that,” he said.

“That resulted in eight heritage buildings across the state having separate grants.”

Speirs said he was “very flexible” with the timeframe for vacating and he was not going to kick the National Trust out of Ayers House within 31 days, despite the formal notice stating otherwise.

“We want to provide them (the National Trust) with support to transition carefully, to take the items that they have in that building (and) many should stay with the building – they belong to the building.

“Others will need to be transitioned out.”

Shadow Environment Minister Susan Close told ABC Radio Adelaide that the decision “sounds like punishment” after the National Trust criticised the government-approved demolition of the historic Shed 26 at Port Adelaide in 2019.