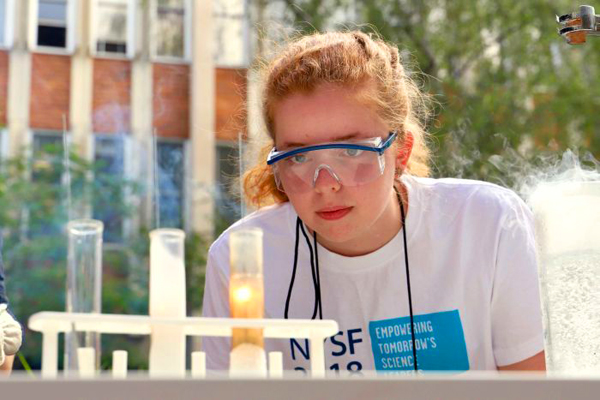 Anna Dallmann is determined to pursue her dream of being an engineer, ABC News: Jake Evans.

Young women keen on the sciences say stigma is still holding them back from pursuing a future in the field.

Hundreds of Year 12 students will take part in the National Youth Science Forum in Canberra throughout January — a program that has attracted more young women than men for decades.

But that budding interest in the worlds of science, technology, engineering and mathematics (STEM) is not translating to the classroom, and even more young women are dropping off as they approach university.

“Even girls who were actually really passionate about them when they were younger, which was really sad to hear.”

But following that cohort to 2015, female graduates from classes like engineering and information technology were as low as 14 and 13 per cent respectively, despite two-thirds of non-STEM graduates being women.

Science forum attendee Anna Dallmann, 16, said she did hear discouraging stories of women’s experiences in the sciences at university.

‘You can’t start science too early’

Former WA chief scientist Professor Lyn Beazley, who was the first female chief scientist in Australia, said current university students should work with schools to break down stereotypes of how women are treated in the sciences.

“It’s sad isn’t it? Because I think on the whole these are very rare instances, but these impressions are maintained,” Professor Beazley said.

“Students [should] work with schools. You work with the students there and you explain what life at a university is like, you invite the students onto campus, so they can experience what is happening.

“One thing I did when I was working at the university was insist on teaching first year, because I thought it was so important.

“We still have a minority of professors in most universities who are women, but I think we need to stand up as role models, so that the young women coming through can see: ‘I can do that too’.”

Anna said despite the stories she heard, nothing would stop her from chasing a career in engineering.

“I want to pursue engineering, and I’m going to do that,” she said.

Anna said it was thanks to a teacher encouraging her to apply that she came to the National Youth Science Forum.

Professor Beazley said that kind of support would bring more women into the sciences.

“You can’t start teaching science too early. As soon as someone asks ‘why is the Moon there?’, ‘why is the grass green?’, you can start talking science,” she said.

“It’s the continuum we need so we don’t get these persistent stories, and young women will know they will be appreciated.”