August 14th, 2019 | Browse other: News. | Tagged with: how history informs our democracy, inquiry into nationhood national identity and democracy | 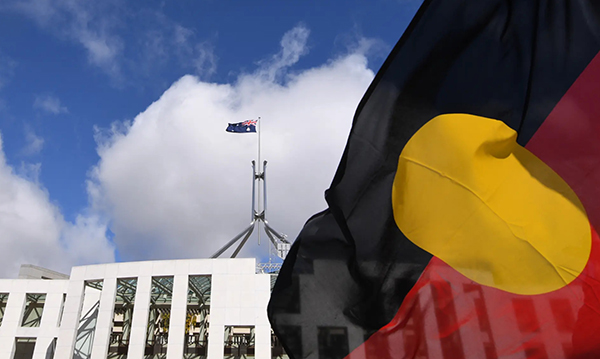 Paul Daley, The story of Australia is neither simple nor easy. How about some honest history?, The Guardian, 9 August 2019

Too many politicians opt for an uncomplicated For-We-Are-Young-and-Free narrative, but we can be so much more

Even before the Senate recently voted for an inquiry with wide-ranging terms of reference into “nationhood, national identity and democracy”, the word was out among progressive historians who’ve long wanted a public airing of how history informs our democracy.

Indeed, an open inquiry into how history instructs our national sense of self, and how politicians cherrypick the bits that suit (to justify participation in modern wars, for example, or so they might deliberately eclipse in public consciousness the conflicts and massacres upon which the modern state is founded) is long overdue.

Moved by the Labor socialist left’s Kim Carr and seconded – curiously at first glance, but not so much upon consideration of her comments about it – by the Liberal Nationals’ Amanda Stoker, the inquiry will accept submissions until the end of September. Carr has written, after the recent federal election result, of the dangers of populist nationalism, while Stoker, conversely, seems to want to examine “the way in which identity politics challenges and harms social cohesion, and whether it should have a role in our future”.

Some on the inquiry will genuinely pursue the big questions of history that shape our national identity and ethos, and others – it seems clear – could well use it to rake over questions of “political correctness” and “identity politics”, euphemisms for concerns among the extreme-right that the progressive centre and left is overly preoccupied with “virtue-signalling” about migrants and asylum seekers, Indigenous people and other minorities.

The Greens leader, Richard Di Natale, said when (cautiously) voting in support of the inquiry, that he was confident the terms of reference would ultimately render it constructive.

However, he warned: “But … given some of the voices in this place who have clearly expressed negative sentiment towards immigrants and who clearly do not support multiculturalism, we are also concerned that this committee inquiry has the potential to be used for purposes that we don’t support … We will be watching very closely that this doesn’t become a vehicle for people who have, quite frankly, racist and bigoted views.”

We need more statues of Indigenous people and migrants, of women and risk-takers who’ve enhanced our democracy.

It is imperative, therefore, that progressive thinkers make submissions to the inquiry.

In recent years Australia has lurched from one controversy to the next in a space of public, political and media discourse that is too often dismissed with the lazy, shorthand sobriquet of “culture wars”.

In fact, much of what is under question – the treatment of Indigenous people, past and present, attitudes towards and policies about refugees, ethnic and religious minorities and asylum seekers, and LGBTQI people, the parts of our history that we celebrate or forget and our big moments of national commemoration – is intrinsic to the faith we invest in our leaders to narrate the Australian story, at home and abroad.

And so we have had the fracas over the Ramsay centre for western civilisation’s proposed university course that would promote the virtues of western culture (because what Australia really needs is a greater promotion of such values on campuses at the expense of others!) with all the caveats and compromises that might impose on a tertiary institution that embraced such a curriculum.

Ongoing budget cuts to institutions such as the National Library of Australia, the national archives and museum, and the Museum of Australian Democracy, all of which reflect diverse and disparate elements of our past and present, continue to receive little political, media and public attention. They are dismissed as largely boutique-left preoccupations.

Concerns, meanwhile, about the profligate $600m spent on the centenary of Anzac, the equally unnecessary promised $500m expansion of the Australian War Memorial, are similarly shrugged off, often with a bipartisan wave of the hand, as the obsessions of a left-elite.

In fact that’s far from the truth. Patriots who admire the war memorial and learn from the Anzac experience, also feel that too much attention has been given to the supposed national birthing story attached to the first world war. They want to embrace a broader, more honest narrative about where this nation comes from, and they want to sensibly discuss which parts of its history we should cling to, and use to appeal to and shape national sentiment.

The true story of Australia is neither simple nor easy, of course. And complexity, unfortunately, is often anathema to the quick public appeal of the political slogan. Too many politicians will always instinctively opt for a linear, uncomplicated, For-We-Are-Young-and-Free–type of national story.

And so next year will begin the carnival-like celebrations for the 250th anniversary of James Cook’s non-discovery of Australia while the appeal from Uluru in 2017 (to the Australian public, mind – never to the politicians) for historical truth-telling about Australia’s cruelty to its Indigenes and for a constitutionally embedded voice to parliament, is duck-shoved and glad-handed around the corners of national discourse and the cabinet room like some unwelcome uncle at the family barbecue.

Where would I – where will I – begin? Not at 1770 or 1788, despite the disproportionate cultural and historical emphasis that generations of political leaders have invested in both at the expense of the legacy of 60-plus millennia of Indigenous continental civilisation.

If I were to make a submission that is the experience I would probably aim to emphasise. Perhaps I’d spin it out of Jim Bowler’s discovery, 50 years ago, of Mungo Man, the 40,000-plus-year-old remains of a modern Australian Aboriginal person, his links to the cosmos and all of his profound implications for continental Indigenous antiquity, civilisation, environmental knowledge and spiritual belief.

Maybe I’d ponder why his return to the country (to be stored in the basement of a visitors’ centre) from which his bones were taken did not warrant the great national moment of reflection bestowed upon, say, the dedication of a memorial to the unknown soldier in 1993.

Our constitution is already racist, but the politics around the voice have been craven and nauseous

We walk each day through urban and rural landscapes replete with statues of white men – soldiers and sailors, governors and explorers, church leaders and civic builders, many of whom were responsible for atrocity against Aboriginal people and some of whom were also the beneficiaries of slavery.

We need more statues of Indigenous people and migrants, of women and risk-takers who’ve enhanced our democracy. There’s too much statuary of white warriors and not enough of peacemakers imposed on a country with a recent past, just about wherever we tread, of extreme violence.

Our nationalism (built at federation upon white Australia) remains dangerously homogenous, isolationist and insular, and our patriotism myopically focused on mostly white moments of military and pioneering triumph.

We have a big, complicated, timeless and difficult national story. And yet, thanks to our political leaders, we allow ourselves and the world only the narrowest glimpses of the whole.

We can be so much more.

Here’s an opportunity to put the horse of honest history ahead of the cart of politics.