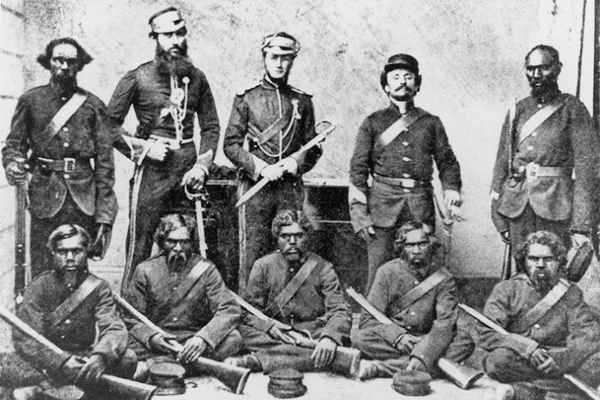 Warning: This story contains images of Aboriginal people who are deceased.

Professor Bryce Barker, an archaeological anthropologist from the University of Southern Queensland, is one of the leaders of a research project investigating the evidence of Native Mounted Police life.

The troopers were brought in from other parts of Queensland or New South Wales, where Aboriginal communities had already been broken up and their land taken over.

“The native police were a paramilitary force, who consisted mainly of a white officer and sometimes a white sergeant, but mainly Aboriginal troopers,” Professor Barker said.

“These were young men in the main whose traditional pathway to success was no longer available to them.

The forces led counterattacks against the Aboriginal resistance, killing many Aboriginal people across Queensland.

“We know from the documentary record that massacres and frontier violence were relatively widescale,” Professor Barker said.

“Throughout the 19th century whenever massacres became public, there was often an inquiry.”

But locating massacre sites is often difficult because of the nature of the conflict.

“Native Mounted Police would ride through a camp, perhaps shoot two or three people and everyone would run off into the bush,” Professor Barker said.

“Quite often those bodies were burned or the people would come back afterwards and traditionally inter them, so it’s very unlikely that you’re going find mass graves of massacred people.”

Building on the documentary evidence, the archaeological team set out to find the physical evidence associated with these frontier conflicts.

“What we soon realised was [that] Queensland native police set up base camps all over Queensland,” Professor Barker said.

“Looking at the record, we were able to establish that there were over 200 of these established at various times across Queensland.”

Although many Native Mounted Police camps were occupied for a few months, some were maintained for a period of more than 20 years, giving the team confidence that physical remnants would still be there.

“We used the old maps to try to locate these camps, with the idea of not only effectively recording their precise locations, but also to excavate them to actually tell us something about how people lived in these camps,” Professor Barker said.

“They are all over Queensland — the first native police camp was at Goondiwindi just before Queensland became a state.”

As settlements spread westward and to the north, more Native Mounted Police camps were established to combat local Aboriginal resistance.

“So as soon as settlers moved into a new area, there would immediately be letters to the colonial office in Brisbane requesting, ‘we desperately need the Native Mounted Police up here to deal with attacks from the blacks’,” Professor Barker said.

Camps were maintained for as long as the conflict took to suppress, which often depended on the terrain.

In hardy, mountainous country not suited to horses, Aboriginal groups were able to hold off police with guerrilla-style fighting for longer periods.

In Queensland’s far north around the town of Laura, the native police operated for 20 years, one of the longest maintained camps in the state.

“The further west, the flatter the country, the shorter the duration generally of the camp because basically people had nowhere to run to,” Professor Barker said.