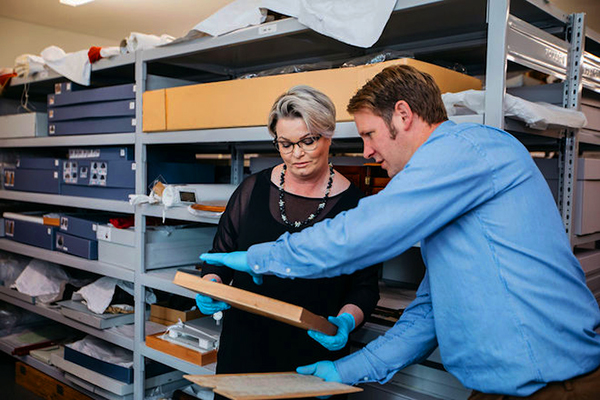 The strongly-voiced demands across many of its sessions – that First Nations people be allowed to speak for themselves in the sector, taking the lead in representing their cultures – provided an apposite starting point for our conversation.

At the conference, Franchesca Cubillo, a Yanuwa, Larrakia, Bardi, and Wardaman woman from the Top End who happens to be the co-chair of the reference group for the NAAG, put it like this:

The challenge that I make to all of you, please don’t continue to look at multiple voices in your spaces,  please support Aboriginal and Torres Strait Islander people to have their own voice in their own institution telling their own stories. It is 250 years … I think we’ve come to the point where the patience is running out.

Born in the UK and raised largely in New Zealand, Ms Puklowski is not Indigenous. How much of a barrier does she think this will be in leading the development of the NAAG? 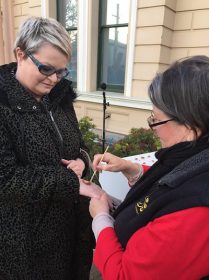 This is never going to be a comfortable question. She referred it to the department (of Arts and Culture), as a question, she said, “about the recruitment and appointment process”. But once she takes up the job, on 24 May, it will be a constant subtext, when it’s not to the fore.

She did say that she is really looking forward to drawing on everything learned in her career “to ensure what we have is an incredible expression not only of Indigenous art and visual and cultural expression, but that provides leadership opportunities for our First Nations people.

“It needs to be a ground-up approach,” she said. “We need to have our First Nations people involved in all aspects of this project.”

But clearly, for the time being, not at the top.

Next uncomfortable subject: the significant local disharmony surrounding the project and how she will overcome it.

She would surely have informed herself about it, but to make clear what I was talking about I outlined the basics: the persistent dissent from a notable number of (not all) custodians and native title holders around the government’s proposed location for the gallery; the bad blood caused by the government’s compulsory acquisition from the Town Council of Anzac Oval, necessary to make the proposed location viable; and the unhappy parting of ways with the original steering committee, co-chaired by Hetti Perkins and Philip Watkins.

In relation to the site for the gallery, again she referred me to the department, but said: “I know that this been quite a journey.”

When she was in Alice Springs recently, finalising her recruitment and introducing her husband to the place before their relocation, she said she talked informally to a number of people, asking them what they thought about the project. 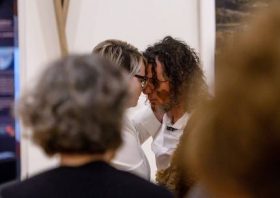 “The overwhelming sense I got is people really want this to move forward, they just want to get on with it, they want to see this happen.”

To turn the ship around – and it’s about as stuck at the moment as that Japanese container ship was in the Suez Canal – she spoke again of drawing on the lessons learned from everything she’s done, the most significant being her 10 years with Te Papa, the bicultural Museum of New Zealand.

She described it as “one of the world’s most ground-breaking museums from a cultural perspective”. From its founding in 1998 it “rewrote the museum book”, making an “amazing impact on museums and galleries around the world in how they really approach what they do”.

It’s about more than respect for Maori culture, rather their worldview imbues every single aspect of its operation: staffing, policies, content, interpretation, architecture. Te Papa embodies the Maori culture, she said.

There and in other roles she “learned a lot about listening”, a practice that will guide what she does in Mparntwe.

“It becomes your normal, it becomes how you work, that’s a huge part of my philosophy as somebody working in this space.”

On the practical front at Te Papa, she led the development of a major exhibition Gallipoli: the scale of our war. It was “a significant challenge” for the bicultural museum; it required “working in a different way”, including with the film industry, to capture all the stories “that would give expression to museum’s values”.

The show went on to become Te Papa’s most popular ever – saying something in a museum that already gets 1.5m visitors through its doors annually.

The experience underlined Ms Puklowski’s belief in the power of cultural and visual expression, “to tell stories to heal, to provide faith for communities”. 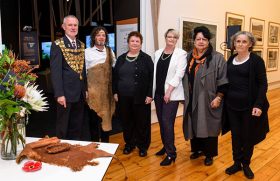 She has also sat on quite a few boards, which has developed her interest in “the interface between tourism and culture, and the role that museums and galleries and cultural institutions can play in transforming towns, and really creating a different kind of outcomes for communities”.

While the town itself is “a living art gallery”, the bricks and mortar gallery will provide opportunities, employment, social cohesion: “It’s so much bigger than a place with beautiful paintings to look at. It’s about way, way more than that. That’s what really drives my interest as a professional and as a person.”

She will be leaving her job in Launceston where she has headed up, since September 2018, the Queen Victoria Museum and Art Gallery – Australia’s largest regional cultural institution – as well as driving a cultural strategy for the city.

She emphasised her experience of working with the Aboriginal Reference Group for QVMAG, adding to her “pretty full tool kit” for taking up the challenge of building the NAAG from scratch.

Its lack of a collection is not necessarily a disadvantage, she said, but rather an “opportunity to think laterally”, citing the experience of the National Museum of African American History and Culture, which built its collection by going into the community and taking a different approach to storytelling. Her visit to that museum – one of several dealing with memorialisation and difficult stories, relevant to her role at the National Army Museum of New Zealand – “blew my mind”.

“It’s places like that that provide me with inspiration to lead.”

On managing the relationship to the Aboriginal Art and Cultures Centre that is being built in Adelaide – much further advanced than the Alice Springs project – she said it is “fundamentally about complementarity”.

“We’ve got that in Tasmania at the moment”, she said, with the relationship between the Tasmanian Museum and Art Gallery as well as MONA in Hobart and the QVMAG in Launceston.

“It’s not about oneupmanship” but rather about how they complement one another, what each does that is unique, but together collectively provide an “amazing national experience”.

“One of most unique elements” about the NAAG is “where it is, in the heart of the country, near to where the Uluru Statement was delivered.

“That says something about the placement of this project.”

As for making real the vision behind its proclaimed status as a “national” institution, Ms Puklowski said that “vision emerges from talking to people, talking to community”. It’s not the director who “waves a magic wand”.

But she did point to the significant opportunity represented by digital communication and art. She was involved in digital collecting in her position at the National Library of New Zealand and sees it as an “incredibly exciting space for us”.

She also spoke of the potential for the gallery to offer qualifications in museum studies (at Certificate IV level) as she was involved within New Zealand. That too would “set us aside”, give the project “new meaning”.

“It needs to be a place where we can help people develop their careers, their skills, and determine what they want their future to look like.”